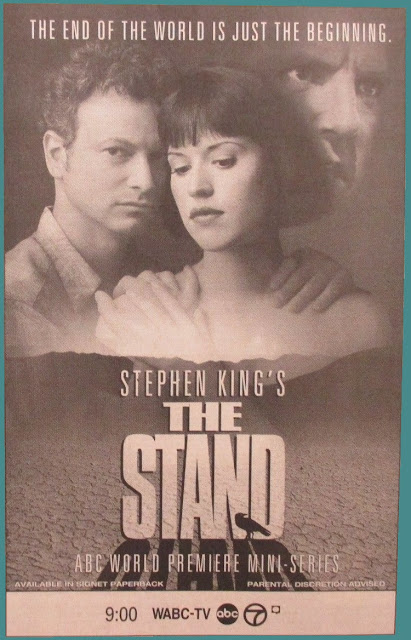 Stephen King's The Stand
ABC Television mini-series
People who know me might tell you that Star Wars is my favorite work of fiction; however people who really know me will tell you that it's The Stand.  The mini-series that was inspired by the work that I consider to be the greatest novel of the century in which it was written premiered on ABC twenty years ago today.

I didn't see this when it first aired.  I brought the VHS tapes home to watch when I worked at Blowout Video as a teenager.  There are significant differences from the book, both in the characters and in the story, but if you approach the mini-series as an alternate universe instead of a televised version of the book, there is plenty to enjoy here.  "Don't Fear The Reaper" by Blue Oyster Cult sets the tone from the very beginning, and the score throughout the series, by W. G. Snuffy Walden, is haunting and beautiful.  "Don't Dream It's Over" by Crowded House beginning in Franny's living room (or was that her mother's parlor?) and continuing as a backdrop to the aftermath of the plague is unforgettable.  Larry Underwood's character (played brilliantly by Adam Storke) captures the moment of the journey across the country when he sits on a car in a traffic jam of the dead playing Barry McGuire's "Eve of Destruction".  Larry also puts music to "Baby, Can You Dig Your Man" sixteen years after it first appeared in print.  I still wonder who performed it for the mini-series, and if a full version of the song exists somewhere.

There are a lot of little Easter Eggs hiding in the mini-series.  Some are references to the novel that were cut from television, while others are just fun things to find.  For example: who on earth put a New York Mets bumper sticker on The Monster Shouter's sandwich boards?  The cast members themselves have such a diverse background that it's fun to connect the dots to their previous work.  Is that My Favorite Martian as Glen Bateman?  How about Agent Rosenfield from Twin Peaks as Lloyd Henreid?  Is that Max Headroom as The Trashcan Man, and is he bowing down and praying to Biff Tannen's Pleasure Paradise?  Did Jigsaw's female accomplice from the Saw franchise learn how to be a henchwoman by working for Randall Flagg?  Didn't I see Mother Abigail as a much younger woman in college when we watched A Raisin In The Sun?  Was that Officer Vinnie Schtulman picking up Nick and Tom on the road to Hemingford Home, and what the heck did Alf do to Willie Tanner to make him want to arrest Stu Redman in Arnette?  The series has dozens of actors and actresses that you will recognize, both in major and minor roles.

Don't go into this looking for an exact copy of the novel, but if you have a half dozen hours to devote to your television, give this a watch.