Property Management For Cash And Prizes 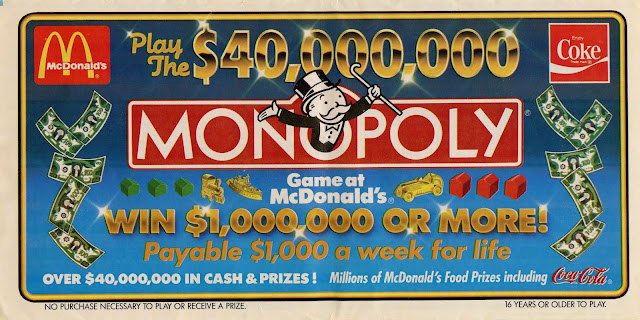 The $40,000,000 Monopoly Game
McDonald's (1987)
The first McDonald's Monopoly promotion began thirty years ago today and was a phenomenon from day one.  I was six years old at the time and I remember seeing the peel off property game pieces everywhere.  The kids at my elementary school traded them with each other as enthusiastically as we traded baseball cards and Garbage Pail Kids.  Even after the promotion was over, it was typical to find these alongside the spare change in cars or in the kitchen junk drawer next to the pens and scotch tape.

My grandparents kept the Monopoly board where all important documents were kept - on top of the microwave in the butterfly clip.  While the contest was running, I would anxiously peel off the game pieces from the food or soda cup and stick them to the board in the hopes of collecting the entire color group and winning a prize.  The game piece that everyone was hoping to find was #22 - Boardwalk.  I think I speak for everyone who participated in this promotion when I say that we all had at least a half dozen Park Place stamps, but there was only one Boardwalk stamp in the entire world, and you needed both Park Place and Boardwalk to win the grand prize of $1,000 per week for life. 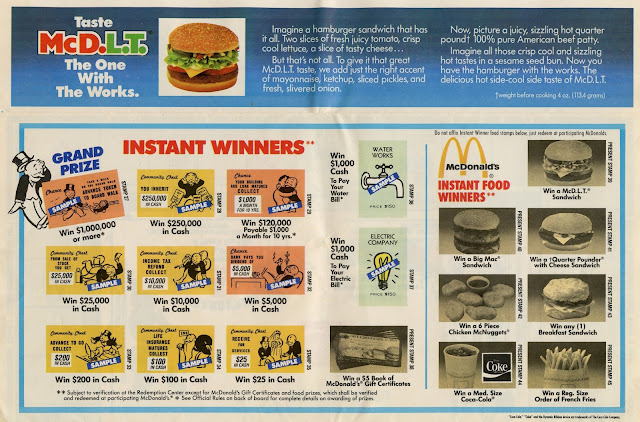 In addition to the property game pieces, there were a number of Instant Win stamps that could be found.  The top prizes that could be won in this way were on stamps that looked like Chance and Community Chest cards, including an "Advance Token To Boardwalk" stamp which was the same as having the Park Place and Boardwalk stamps - it awarded the grand prize of $1,000 per week for life.  I never found any of those, but I did find plenty of the Instant Food Winners stamps.  Once I wised up to the fact that each color group had one property that was almost impossible to find, these were the stamps I was the most hopeful of finding.  I found lots of stamps that could be redeemed for a free order of french fries and Coca Cola, and a few for the Chicken McNuggets and sandwiches.

This promotion was such a massive success for McDonald's that they brought it back the very next year.  The second time around, the grand prize was $2,000 per week for life.  Naturally, we all played along and collected Monopoly stamps for another year.  Since then, they've brought the promotion back intermittently throughout the 90's and 2000's.  At this point, if you are reading this in the United States, the chances are pretty good that a McDonald's Monopoly game piece from one of these years is hiding somewhere in your house.  It might be stuck behind the heater.  It may have gotten packed into a box in the basement or attic.  It could be at the bottom of your junk drawer, or in the garage, or behind the sofa.  The point is that it's probably there, and you'll probably find it one of these days and chuckle - unless it's the Boardwalk stamp. 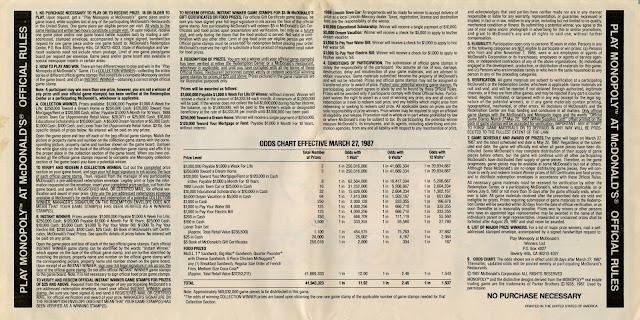