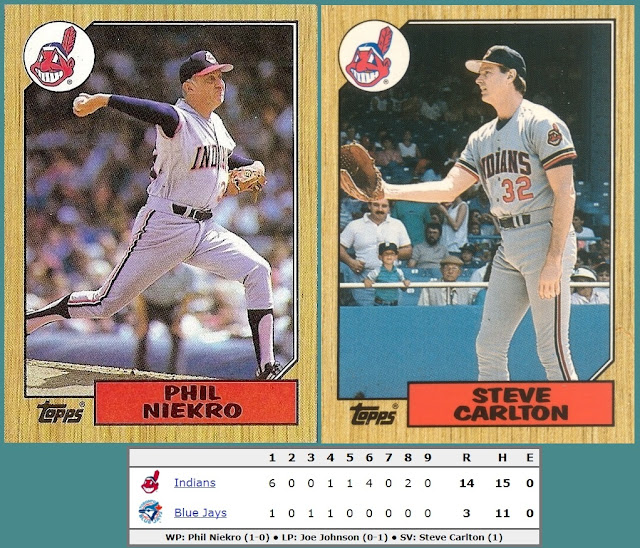 Thirty Years Ago Today: The Cleveland Indians entered the 1987 with great expectations, including a Sports Illustrated cover that pegged them the best team in the American League.   It didn't work out that way.  They finished the season at 61 - 101; dead last in the AL East with the worst record in baseball.  However, their first win of the season was historic.

Phil Niekro entered the game with 311 career wins.  He started for Cleveland in the final game of their opening series against Toronto, pitching 5 innings and giving up 3 runs on 7 hits, including a solo home run from Tony Fernandez.

Steve Carlton began the night with 323 victories, and he came on in relief to start the sixth inning.  He pitched for the rest of the night, giving up 0 runs on 4 hits and earning a rare four-inning save. 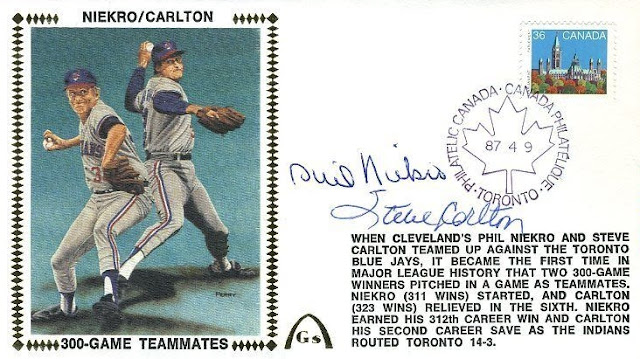 Even more rare was the fact that this was the first time in baseball history that two 300 game winners pitched in the same game for the same team.  They would do so again five nights later against the Yankees, but with significantly worse results.  On that night, Niekro couldn't get out of the second inning.  Lefty came in to pitch 3 2/3, and the future Hall-of-Famers combined to give up 7 runs in what ended as a 10 - 6 defeat (Carlton took the loss).

Neither pitcher would finish the season in an Indians uniform.

Carlton was traded at the deadline to the Minnesota Twins; the last team that Lefty would ever pitch for.  Steve had one last gem to deliver, and he did so on August 8th, coming one out shy of a complete game and giving up only 2 runs on 7 hits against the Oakland A's for his 329th victory - the last of his career.  The Twins would go on to win the World Series.  Although Carlton was not on the post-season roster, he earned a World Series ring and visited the White House with the team to meet with President Ronald Reagan.  The photos that were taken of that event misidentified Lefty as a secret service agent.

Just over a week later, Niekro was traded to the Toronto Blue Jays - the team he and Carlton combined to defeat in the first week of the season.  His time in Toronto was short lived.  He would be released by the Blue Jays after only three starts in which he went 0-2 and gave up 11 runs and 7 walks in just 12 innings pitched.  In what was a very classy move, the Atlanta Braves signed Niekro on September 23rd and had him start the last home game of the season with the team that he began his career with in 1964.  In what would be his last career game, Niekro gave up 5 runs and was taken out before he could record an out in the 4th inning.  Although the Braves would go on to lose this game 15 - 6, Niekro was taken out of the game to a standing ovation with the game tied, and he did not get the loss.