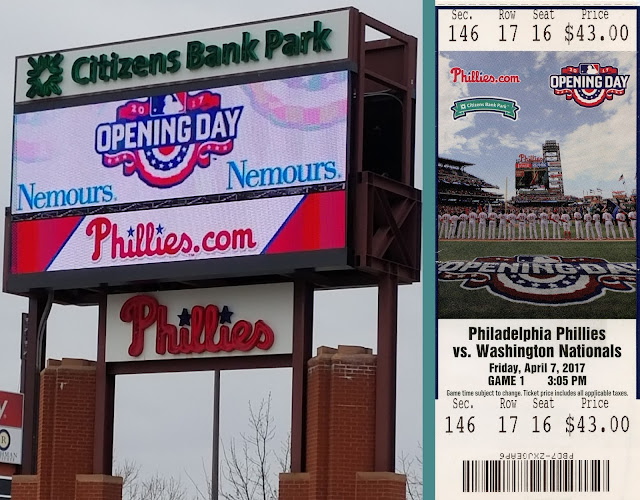 Pitching: Max Scherzer vs. Vince Velasquez
Results:  Nationals defeated Phillies, 7-6
It was a pretty cold home opener this year.  Thankfully, the free giveaway at the ballpark today was a knit hat, so that immediately came in handy for myself and the other 45,000+ in attendance. 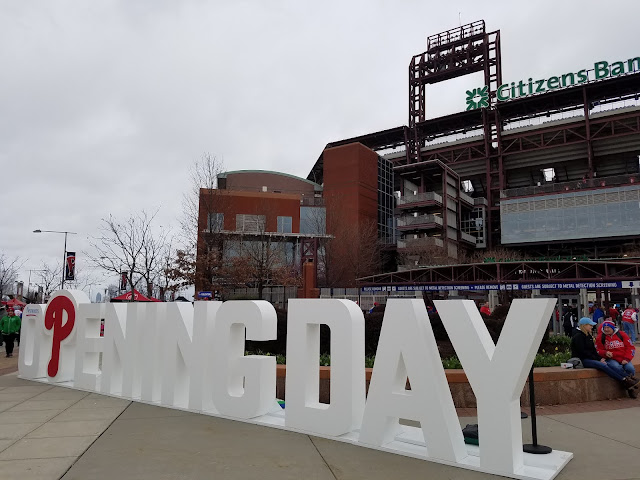 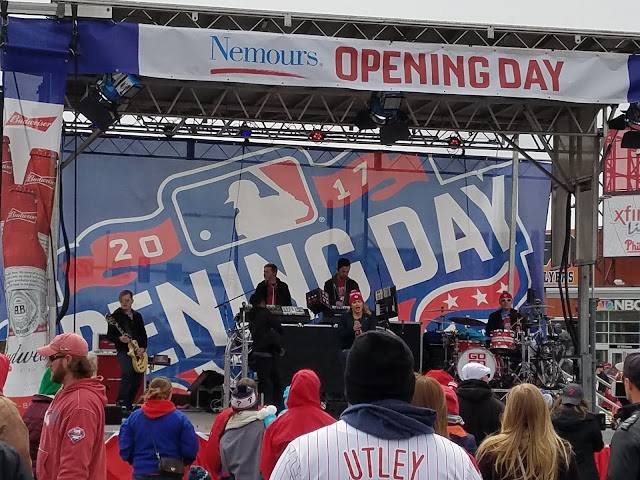 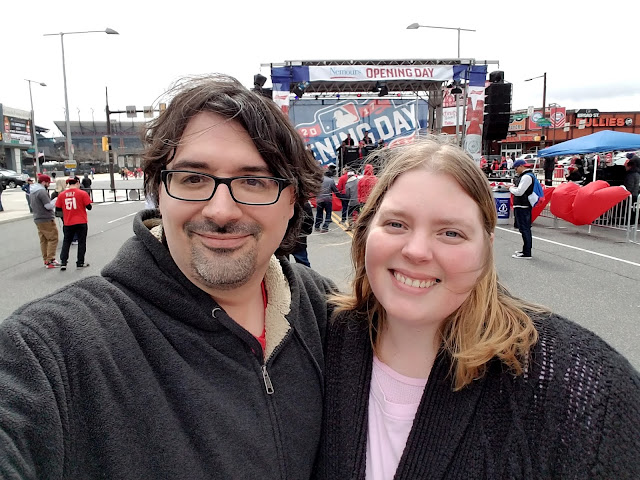 Before the game, there was live music, a ferris wheel and a lot of other cool stuff outside the park.  It wasn't quite as festive of an atmosphere as Opening Day 2009, but you'll have this when you're not coming off of the second championship season in franchise history.
Once we were inside the ballpark, I accidentally stumbled into a parade of the entire team down Ashburn Alley, led by the Philly Phanatic, as they were on their way to take the field for opening introductions before the game.  I was on my way to Chickie's & Pete's for something to eat and had no idea that this was about to go down, so it was just a case of being at the right place at the right time.
There was also a little Coca-Cola kiosk set up where you could turn yourself into an animated gif bobblehead.

They also printed out copies of the photo for everyone to have, and it didn't cost a dime.  Pretty awesome of you, Coke.  Thanks! 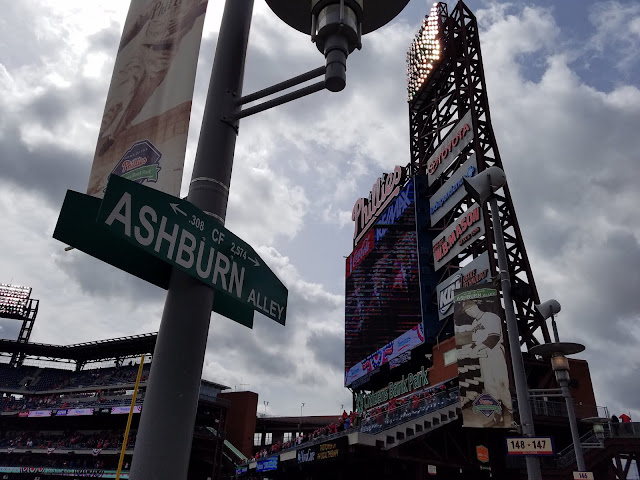 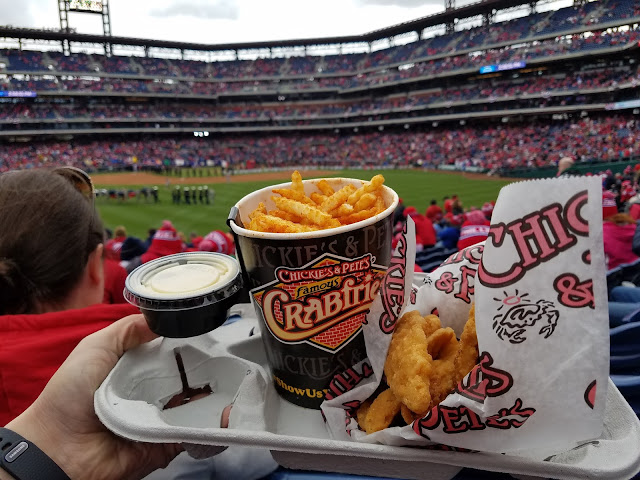 Usually, I try to shoot for tickets on the first base side behind home plate, but demand and prices are pretty high for the home opener, so it was out in left field for me.  It's not bad to watch a game from the outfield - just not my preferred location.  The chicken fingers and crab fries definitely helped me to warm up. 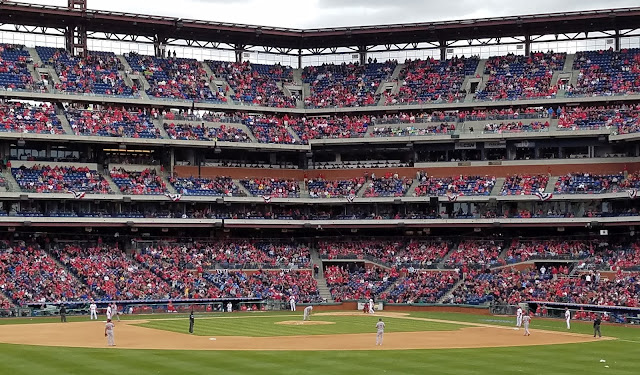 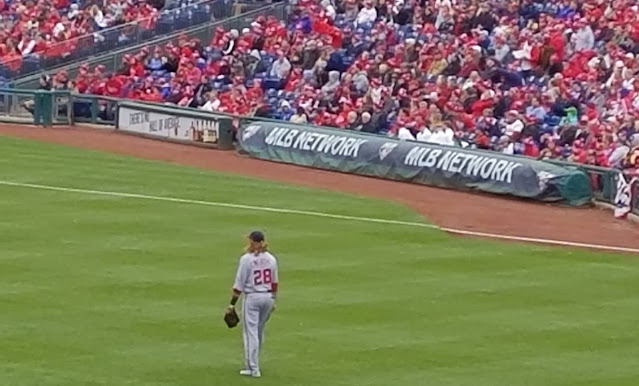 One of the benefits of sitting in left field was that we got to see our old friend, Jayson Werth, up close in the final year of his current contract.  I'll never understand why other Phillies fans boo this guy.  He was a critical piece in our 2008 World Championship and 2009 National League Championship seasons, and he always hustled his ass off.  Yes, he took the money and signed with the Nationals before the 2011 season for 7 years / $126 million dollars, but lets put that in perspective.  It was the 14th richest contract in the history of the sport at the time.  That's pretty damn life changing for a guy who missed the entire season due to injury just four years earlier and had to settle for a bargain basement deal in 2007 as a platoon player.  Any player would have jumped at the chance for that kind of money and security.  I appreciate everything that Jayson Werth did for my team, and I don't blame him one bit for signing with Washington.

The Nationals didn't waste time in this game.  Vinny Velo walked the second batter he faced, and then gave up a two run homer to Bryce Harper - not a good start.  Daniel Murphy hit another homer off of him in the top of the third to put the Nationals up 4-0.
Joely Rodriguez came on to pitch for the Phillies in the top of the 5th and wasn't much of an improvement.  He walked Bryce Harper and gave up a double to Daniel Murphy to put runners on 2nd and 3rd with no outs.  He did manage to strike out Ryan Zimmerman, but Jayson Werth jacked a home run to deep left field to put the Phillies down 7-0.
Meanwhile, Max Scherzer was shutting down the Phillies offense pretty efficiently.  He didn't allow a baserunner until Howie Kendrick doubled in the bottom of the 4th with one out.  Odubel Herrera followed it up with a single, but Scherzer retired Maikel Franco and Michael Saunders to end the inning with no damage.  Cesar Hernandez doubled off of him in the bottom of the 6th, and Odubel got an RBI single, but those were the only runs given up by the Nationals ace.
Thankfully, the Nationals pulled Scherzer in the bottom of the 7th and the Phillies immediately responded by putting some runs on the board.  Sammy Solis was brought in to pitch and gave up an RBI double to Freddy Galvis and a home run to Aaron Altherr to narrow the Nats lead to 7-4. 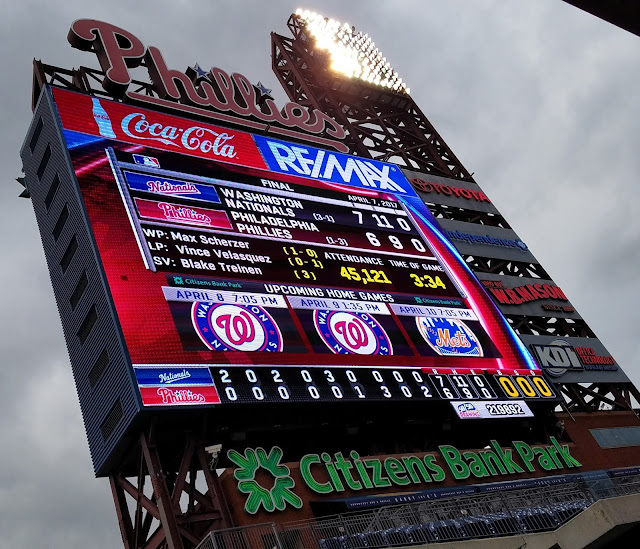 The Phillies looked like they were going to mount a comeback in the bottom of the 9th.  Cameron Rupp led off with a single and Freddy Galvis homered to narrow the Nationals lead to a single run, however the rally didn't continue and the Phillies lost 7-6.
So, the Phillies are now 1-3.  They haven't won since Opening Day, they lost their opening series on the road against the Reds, and now they've lost their home opener to a division rival.  It's not exactly the start that we were hoping for, but it's much too early to count out the Fightin's yet.