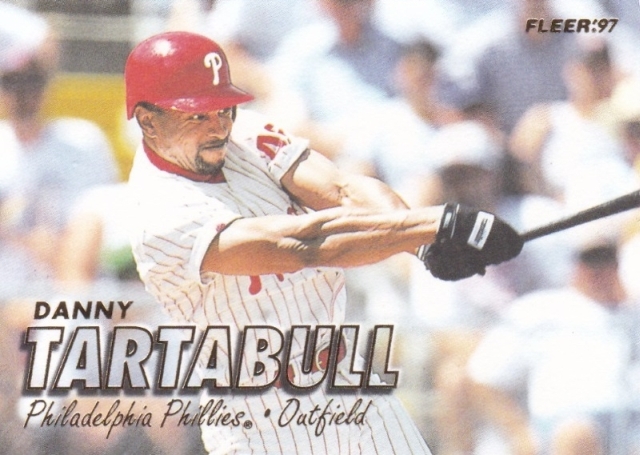 Danny Tartabull - OF
MLB Career: 1984 to 1997
Phillies Career: April 1 to April 7, 1997
The late 90's were not kind to the Philadelphia Phillies or the fans, but no year was more depressing than 1997.  In the first 100 games of the season, the Phillies were 30 - 70.  At their lowest point in the season (July 27th), the team was 42 games below .500.  To make matters worse, they drafted J.D. Drew, who refused to sign because the team wouldn't meet his signing bonus demands.  However, the worst part of 1997 wasn't their draft pick.  It was their big free agent acquisition - Danny Tartabull.

Tartabull played for the White Sox in 1996 and made $5.2 million.  At 34 years old, he finished the season with 27 home runs and 101 RBI.  He was past his prime, but there was reason to believe that he still had a couple productive seasons left in the tank.  Unfortunately for Tartabull, the general managers of the day were less optimistic about his future.  In fact, the only offer on the table was a $500k one year deal with the Reds... until the Phillies got involved.

The Phillies decided that Tartabull was going to be their target free agent.  They saw him as their cleanup hitter behind Gregg Jefferies.  They also didn't mind the indignity of begging a man that no other team wanted to sign for $2.3 million dollars.  After signing, Tartabull wasted no time endearing himself to Phillies fans.  When asked about his trip through free agency that ultimately ended in Philadelphia, he told the media "My number one goal was to sign on with a team that had a chance to go to post-season play.  That didn't happen."  Ouch.

He wasn't wrong.  The Phillies finished the season in dead last, 33 games behind the division champion Atlanta Braves.  However, Danny Tartabull didn't suffer through the season along with the fans.  On Opening Day in Los Angeles, in his first at-bat as a Phillie, Tartabull fouled a ball off of his foot.  He walked twice, but didn't get a hit.  His foot was still sore after the game, so the Phillies kept him on the bench for the rest of the series with the Dodgers,  He didn't return to the lineup until the fifth game of the season, which was April 5th against the Padres.  Again, Tartabull was hitless, going 0-2 with two strikeouts and a walk.  He sat again the next day and returned to the lineup for the last game of his professional career the following day.  The Phillies began a three game series with the Giants in San Francisco twenty years ago today - April 7th, 1997.  Our big free agent prize again failed to get a hit and struck out twice, but he did manage to draw a walk and score a run.

Not long after the game, we learned that Tartabull may have done more damage than expected when he fouled the ball off of his foot on Opening Day.  Reports at the time said that he had a small fracture, and there was a possibility of ligament damage, but there were more than a few grumblings that he wasn't as hurt as he claimed to be, and he used the incident as an excuse to cash in his chips (and his $2.3 million dollar check from the Phillies) and call it a career.  He never played in another game and retired at the end of the season.

The lesson we learned 20 years ago today is that sometimes the big free agent acquisition turns out to be a dud.  In fact, we should make it a holiday and give each other greeting cards at Citizens Bank Park to remind each other that we're all in this together.  We're Phillies fans, and when you wear the red and white, you have to keep in mind that sometimes life sucks.