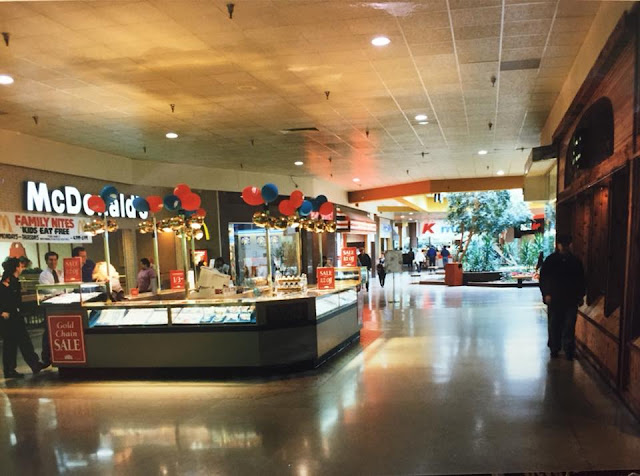 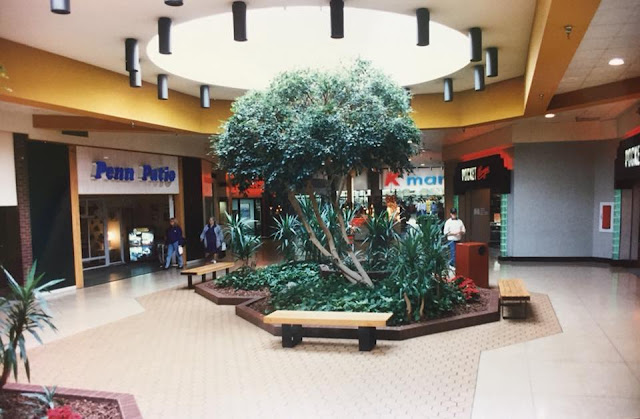 K-Mart wing
Schuylkill Mall - Frackville, PA (1996)
The photo on top was taken between McDonald's (left) and Arby's (right) of the K-Mart wing of the Schuylkill Mall.  Throughout the mall, there were large round skylights that let the sun shine into the mall and onto trees and plants.  You can see the K-Mart anchor store in the center of both of these photos, but the photo on the bottom is much closer.  If you turn left at the K-Mart, it led to a hall past The Peanut Shack and to the movie theater.

The real attraction of this part of the mall was the arcade.  When I was a kid in the 80's, I would come to this mall with my grandparents and make a bee line for the Pocket Change arcade, which you can see on the right hand side of these photos.  It was very close to K-Mart, so I had plenty of time to spend some quarters while my grandmother poked around the anchor store.  To the best of my knowledge, Pocket Change was the first arcade in the area to have a row of Skee Ball machines and a prize counter.  It was a very large and well stocked arcade that had a nice mix of traditional arcade and ticket games throughout the 80's, 90's and early 2000's.