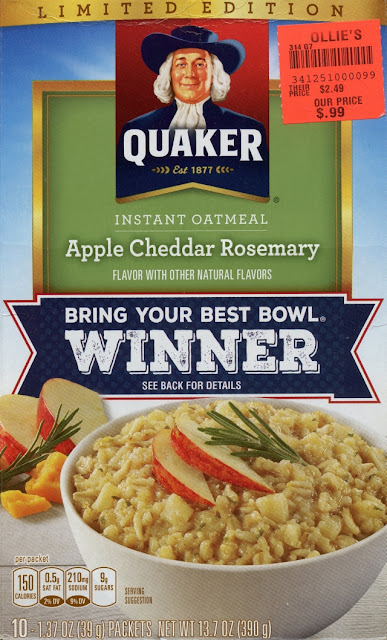 Apple Cheddar Rosemary instant oatmeal
Quaker Oats (2017)
Last year, Quaker put out pack of three flavors of instant oatmeal that were submitted by consumers as a part of their Bring Your Best Bowl promotion.  The flavors were Vanilla Chai, Lemon Ricotta Pancake and Apple Cheddar Rosemary.  People who bought this package were encouraged to try all three and vote for their favorite.

When I first bought this pack, Apple Cheddar Rosemary was the flavor that I expected I would like the least, but it was delicious and by far the best of the three.  It ended up winning the contest, which earned a $250,000 prize for the creator.  The flavor is now being sold as a limited edition flavor and is in stores now.