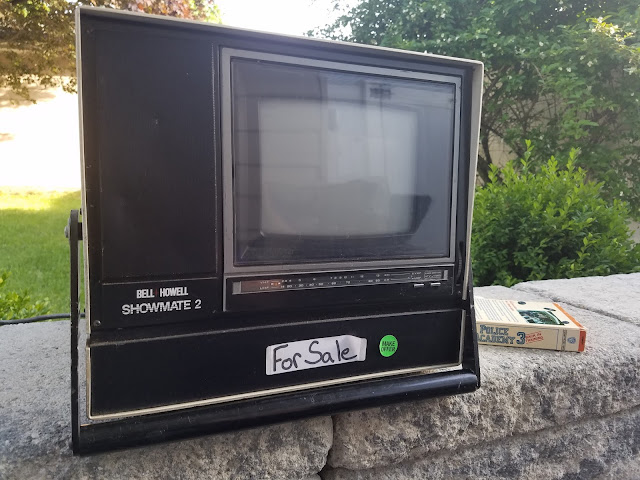 Showmate 2
Bell & Howell
I found this little piece of vintage technology at the Hometown Farmers Market, and I brought it home for the low, low price of $5.00.  It's a 7 inch color CRT TV/VCR combo unit with built-in speakers and a cool little plastic handle to carry it around.  The device weighs about thirty pounds, and it was originally sold by Bell & Howell in 1985-86.
Unfortunately, when I tried to test it out by watching Police Academy 3 in the back yard, the circuit breaker tripped.  So, down to the basement I went to flip the switches and turn the power back on before attempting to test the unit again.  You guessed it - the power cut off again.
After a quick Google search in an attempt to learn how to repair whatever was causing this to happen, I learned that all of the roughly 5,000 Showmate 2 units that were sold (originally for $500.00) had been recalled back in 1988 due to a switch failure which has potential for electric shock and bodily injury.
So, I now own a thirty pound vintage paperweight.