Heaven Is A Place In Hanover 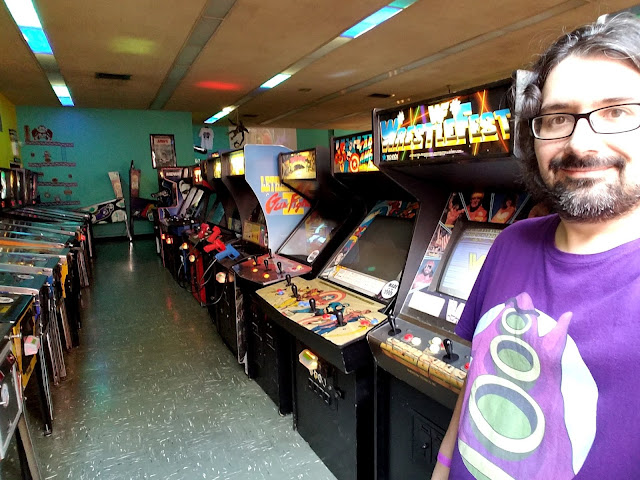 Timeline Arcade
Hanover, PA
This may be one of my favorite places in the world.  A visit to the Timeline Arcade feels like you just hopped into Doc Brown's DeLorean and went back to 1985.  When you walk in, it's like stepping into Aladdin's Castle or Ed's Funcade on the boardwalk at Wildwood.  They have just about every vintage arcade and pinball game that you can think of. 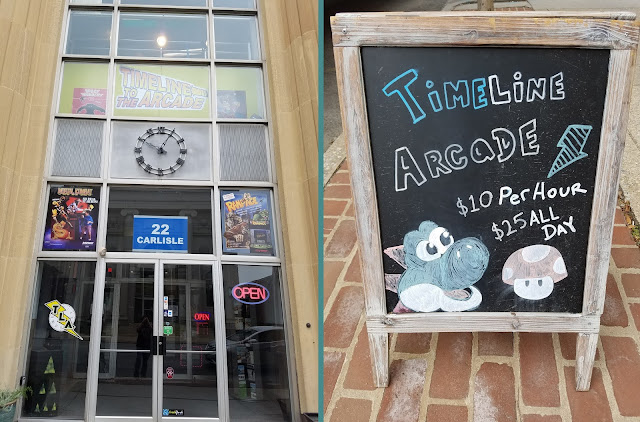 The Timeline Arcade is on the second floor of the former First National Bank and Trust building at 22 Carlisle Street in Hanover.  I can only imagine how difficult it must have been to bring all of these arcade and pinball games up the stairs and around the corner.

You don't have to insert a coin to play anything at the Timeline Arcade.  Each of the games are either set to free play, or they have a card reading device installed that give you credit to play when you swipe your Timeline Arcade game card.  The cards are purchased at the front register.  You can pay $10 per hour of gaming, or you can buy a card for $25 card that will allow you to play all day.  As long as you have an active card, there is no limit to the number of games you can play. 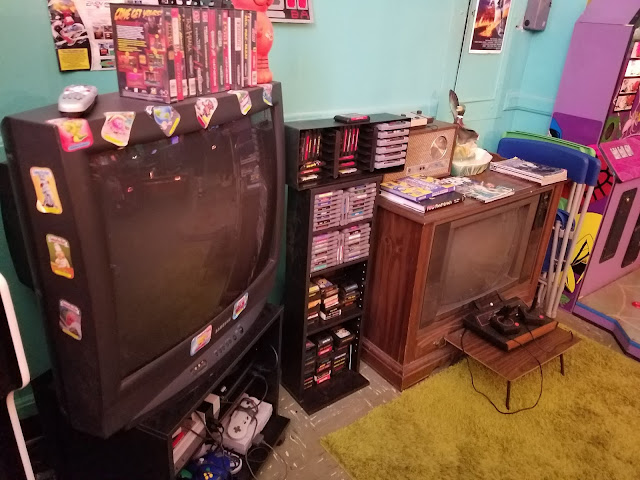 There's a section of the arcade that is dedicated for console gaming.  They have an area with an HDTV hooked up to modern consoles that I didn't play or take a picture of.  It seemed pretty cool, but I couldn't turn away from this epic corner of retro console goodness.  There are two CRT televisions with an Atari 2600, NES, SNES and Sega Genesis hooked up to them, and a very nice selection of games, magazines and tip books.  Had it not been for all of the incredible vintage arcade and pinball games, I would have happily planted myself here and stayed all day. 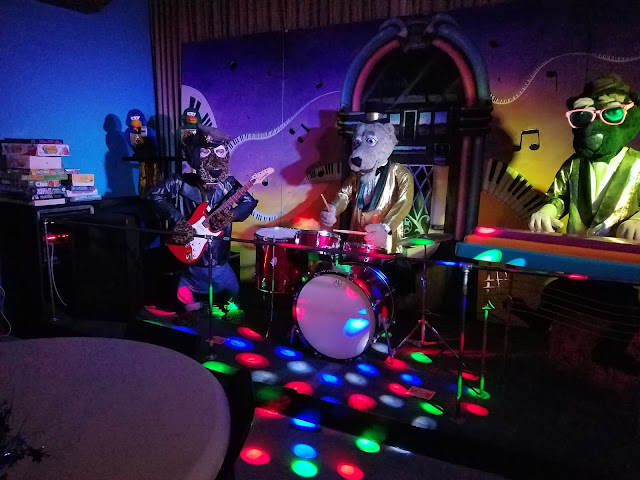 There is also a room that appears to be set up for pizza parties.  This room has a few arcade games, including Dance Dance Revolution.  It also has stacks of board games that you can set up at one of the tables and play with friends, or with total strangers that you meet at the arcade.  The highlight of the room is Mick Jaguar and the Sly Cats.  They're a full animatronic band that the owner of the arcade picked up from a pizza parlor in Missouri.    The band consists of with Mick Jaguar on guitar, Langley Lion on drums, Nick Panther on keyboard, and The Chirpettes on backup vocals (they are the two small birds behind Mick Jaguar). 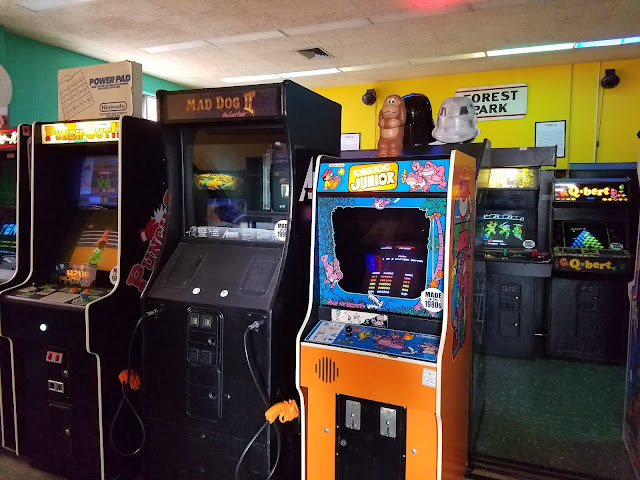 This is the view on the left hand side when you first walk into the arcade.  In this photo, you can see the classic Donkey Kong Jr, the laserdisc shooter Mad Dog II: The Lost Gold, the dual screen Punch Out, and the corner of a Nintendo Playchoice-10 cabinet.  Q*Bert and Teenage Mutant Ninja Turtles are in the background. 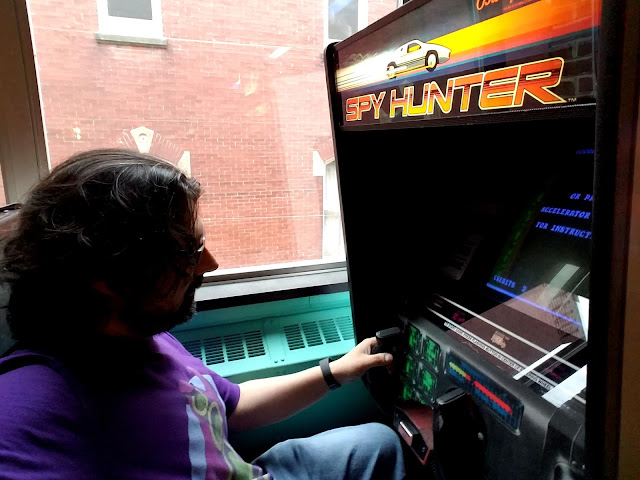 I was thrilled to find a Spy Hunter sit-down arcade cabinet against the wall in the first row of games.  This was one of my favorite games as a kid, but the only one I ever remember playing in the arcade was the traditional stand-up arcade machine.  Playing it in a racing cabinet was just too cool, and the fact that the machine is right next to a window gave it a fun sense of realism.

As much fun as Spy Hunter was back in the 80's, it was definitely a quarter eater.  It's pretty difficult and it's not hard to go through a couple dollars in a short amount of time.  The ability to continue without paying an extra quarter each time allowed me to get farther in the game than I ever had before. 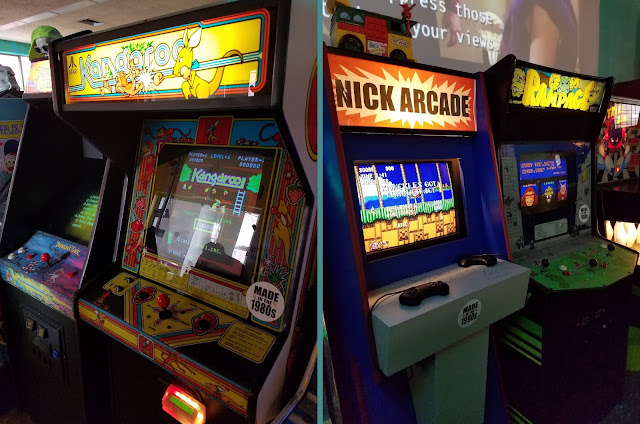 The machine on the left hand side of the photo on the left is a game that has bothered me for over 30 years - Dragon's Lair.  It's a full motion video arcade game that came out in 1983.  Because it was animated by Don Bluth, it is visually stunning, bright, colorful, and everything you'd expect from one of his cartoons.  This was even more impressive to look at in the arcades of the 80's.  Back then, pretty much every game was pixel art or vector graphics with a chiptune soundtrack, and here's this gorgeous cartoon playing off of a laserdisc.  That's where my compliments for this game end.

I have never gotten Dragon's Lair to work properly - not the first time I played it, not this week at the Timeline Arcade, nor at any point in between.  I understand that it's not a traditional video game where you move your character around and swing a sword.  It's very similar to Sega CD games like Sewer Shark and Night Trap that came out a decade later - it's entirely based on timing.  Press a button or move the joystick at the exactly the right moment and it will switch to a video track that shows your character successfully achieving its goal.  However, those Sega CD games had a coherent story that you could follow.  My experience with Dragon's Lair is that Dirk (your character) is faced with a challenge for about three seconds, then he turns into a skeleton and dies.  This is immediately followed by Dirk being placed in a completely different environment for three seconds, then he dies again.

It's a pretty polarizing game.  You either love it or you hate it.  I truly want to love it because it looks amazing, but literally every single time I have played the game over three decades, I have walked away thinking that the machine is broken.  Frankly, I can't tell if it has glitched out and is randomly playing tracks from the laserdisc or if it really is programmed to warp you to a completely separate level every time you die.  If the game play is so awful that you can't be sure if it's malfunctioning or if it's supposed to be that way, it's a bad game.

On a more positive note, they have a custom built Nick Arcade cabinet hooked up to a Sega Genesis with Sonic The Hedgehog.  Nick Arcade was a game show on Nickelodeon that aired in the 90's.  The early episodes featured a lot of Genesis and Turbografx-16 games, and this cabinet looks almost identical to the ones that were on the show.  Very cool!

The other two games in the photos above are Kangaroo and Rampage.  I played a heck of a lot of Rampage in the arcades when I was a kid.  It's a great game where you get to be either a giant lizard, wolf or ape monster and go from city to city smashing buildings and eating anything you can get your hands on, including people.  In contrast to Rampage, Kangaroo is a relatively peaceful game where you play a mommy kangaroo who is rescuing her baby from a gang of kidnapping monkeys.  I had this for the Atari 2600 when I was a kid, but this is the first time I ever saw or played the arcade cabinet.  I'm glad I had the chance to have that experience. 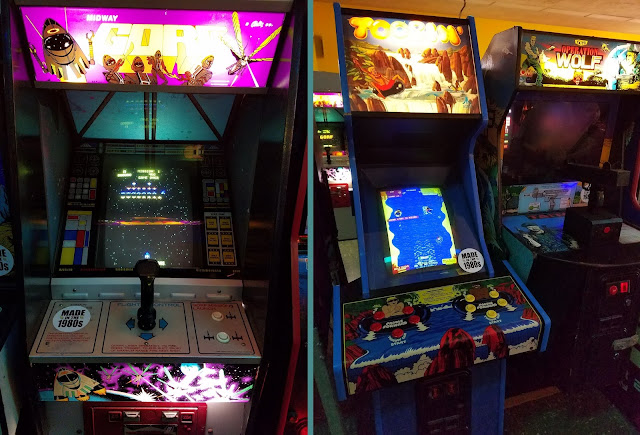 Gorf was released by Midway in 1981 and is, in my opinion, one of the greatest achievements of the golden age of arcade gaming.  Although it rarely gets talked about with the same reverence as other games of its era, this space shooter stood out from its contemporaries.  Other games from this time period, such as Space Invaders, Asteroids, Missile Command and Pac-Man would increase in difficulty as you played, but the advanced levels were basically the same as level one.  The primary difference would be that the game would get faster and add more enemies to overcome.  In contrast, Gorf had five distinct levels, each of which were completely different from one another.  The player would progress from levels 1-5, then would loop back to repeat a more difficult version of each level.  If I were ever to try to set a Twin Galaxies record, this is the game I'd want to shoot for.  The current world record is a score of 1,129,660, which was set by Keith Swanson in 2011.  If I practice on MAME, I think I might be able to beat it, and I can think of no better place than Timeline to do it.

Toobin' is another classic that I think is overlooked by a lot of gamers.  It was released by Atari Games in 1988 - a time when the vast majority of games involved killing or beating up a bad guy, and most of the exceptions to the rule were racing games.  I have no problem whatsoever with violence in video games, but I have a deep appreciation for creativity and originality, and Toobin' delivers on both.  You play as a dude floating down a river on an intertube at the top of the screen.  The object is to collect power ups and go through each of the gates while obstacles try to sink you.  It's an especially fun game to play with a second player because the game allow you to bump each other into obstacles or to push them away from a power-up so that you can steal it.  Unfortunately, I never had the chance to play this in an arcade when I was a kid.  I discovered it in the late 90's on the Midway/Atari arcade compilation Arcade Party Pak for the original Playstation.

The third game in the photos above is one that was at practically every arcade I have been to, from its release in 1987 to present day.  It's a war themed shooting game called Operation: Wolf, in which your goal is to rescue hostages by using an Uzi to fire thousands of bullets at the enemy.  It's one of the best shooting games of its time, but I was more of a puzzle, platform and beat-em-up sidescroll gamer as a kid, so I didn't play it too much.  In fact, my most vivid childhood memory of this late 80's Taito classic is hearing the attract mode speak the words "Operation... Wolf" in a stern tone while I played another nearby game in the arcade. 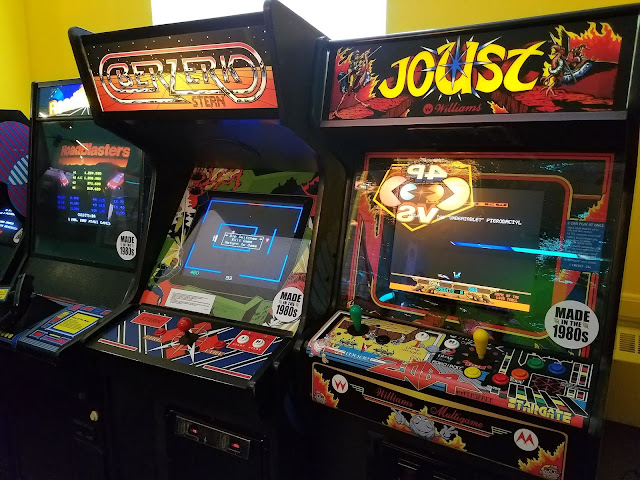 These games are on the wall near the console gaming section of the arcade.  As you can see in the reflection of the Joust screen, there is a four player Pac Man Battle Royale across from these machines.  These three are Roadblasters, Berzerk and Joust.  The monitors on Berzerk and Joust were replaced, but those seem to be the exception, not the rule.  The majority of the games I played had CRT monitors, just as you remember them.  The LCD screens don't bother me one bit as long as the game plays faithfully, which they do.  I had to get a few games of Joust in while I was there.  It's been on my mind ever since I read Ready Player One.

There are way too many games here to do a retrospective on all of them.  I'm sure I'll write about each of them at some point in the future, or I'll circle back and add to this post later.  The photos below are just some of the games available to play at the Timeline Arcade in Hanover.  I didn't want to spend too much of the afternoon taking pictures when there were so many incredible games to play.