Back To The Timeline Arcade 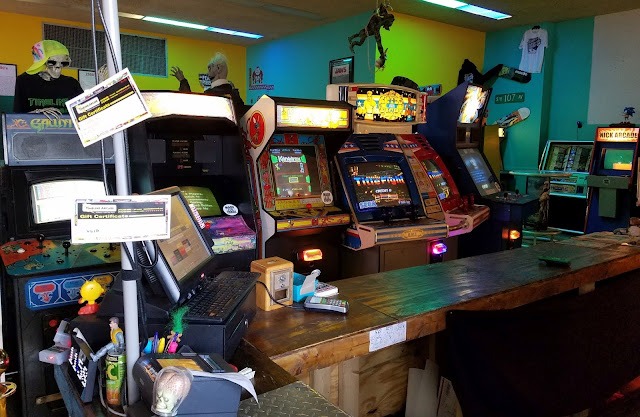 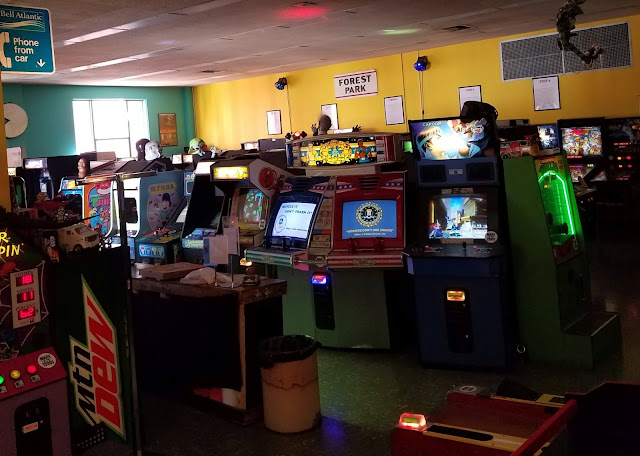 Timeline Arcade
Hanover, PA
Three months ago, I discovered this wonderful arcade for the first time and I had to come back.  If it was closer to my hometown, I think I'd make this a weekly stop.  Unfortunately, it's a two hour drive and I have a little puppy at home, so I don't get to spend as much time here as I would like.

Here are a few more photos from the Timeline Arcade in Hanover, PA. 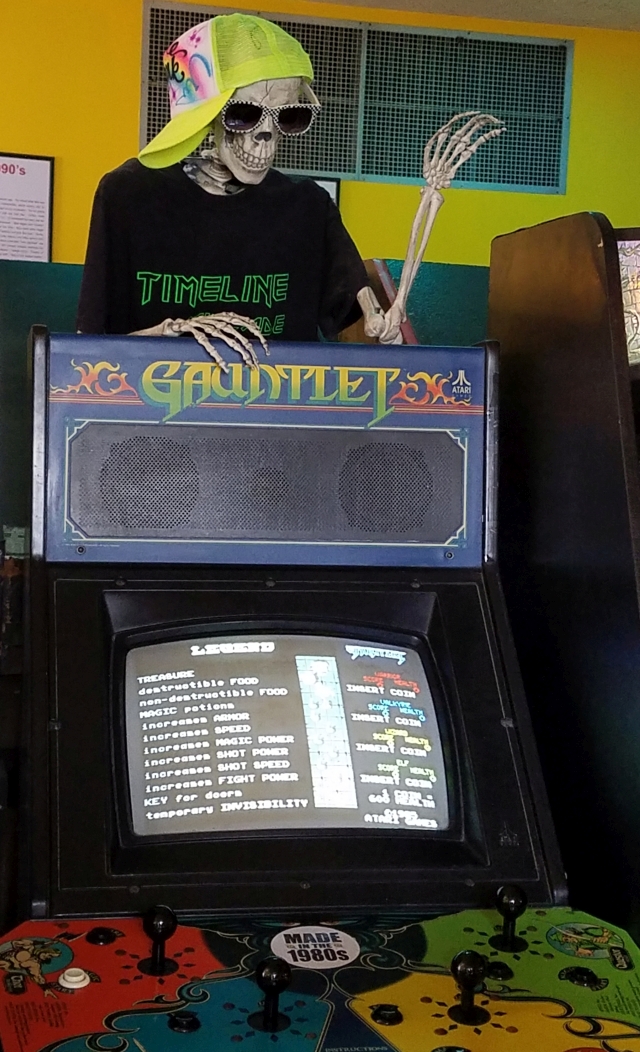 Gauntlet was one of my favorite arcade games when I was a kid.  I first played it in the arcades on The Boardwalk in Wildwood, NJ, and it soon made its way to Aladdin's Castle to eat every quarter I could get my hands on.

It's a four player game, and you can play as either the Red Warrior, Blue Valkyrie, Yellow Wizard or Green Elf.  I pretty much always picked the wizard. 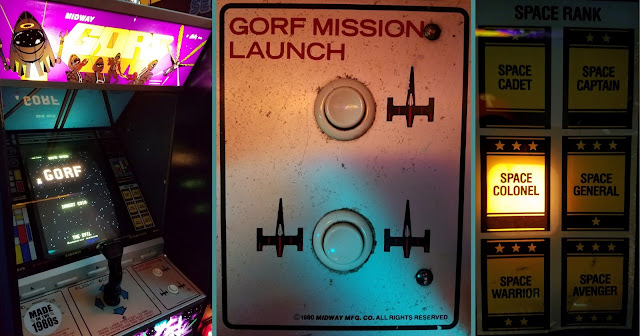 I wrote about Gorf the last time I visited Timeline, but here are a few more photos of the cabinet.  You start off at the rank of Space Cadet, and you move up a rank each time you play through all five levels.  I made it to Space Colonel this time. 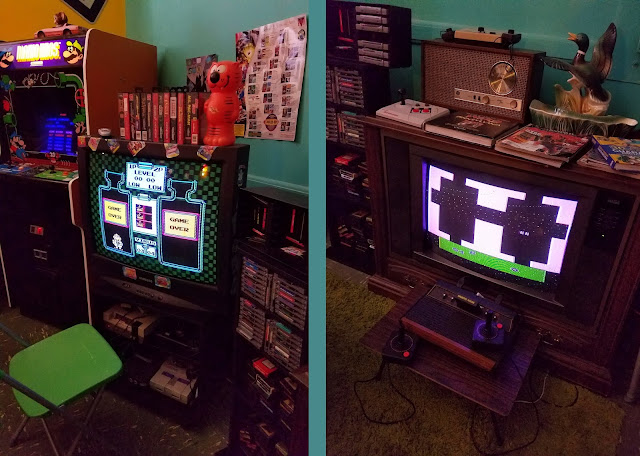 The retro console section is one of my favorite parts of the arcade.  I know it's the same games I can play at home, but there's something about being able to play them with the sights and sounds of the arcade all around that make it a unique and fun experience.

If I lived closer to Timeline and was able to visit more often, I would spend more time parked in front of these two CRTs.  I spent a little time with Haunted House on the Atari 2600 and both Dr. Mario and Mega Man II on the NES before returning to the vintage arcade games. 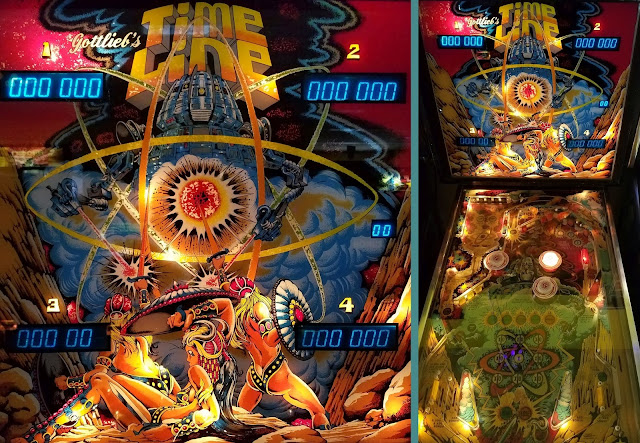 This Time Line pinball machine was released by Gottlieb in 1980.  I'm surprised they don't have this machine more front-and-center considering that it's name is so similar to the Timeline Arcade.  It'd be pretty awesome if they did a yearly tournament to crown a Time Line pinball champion.

I'm no expert on this game, but based on the artwork, it seems as if it's based on the story of three nearly naked Dungeons & Dragons warriors (at least one of whom is female) using swords and shields to fight against an alien spaceship.  Give it time and they'll probably try to turn it into a movie. 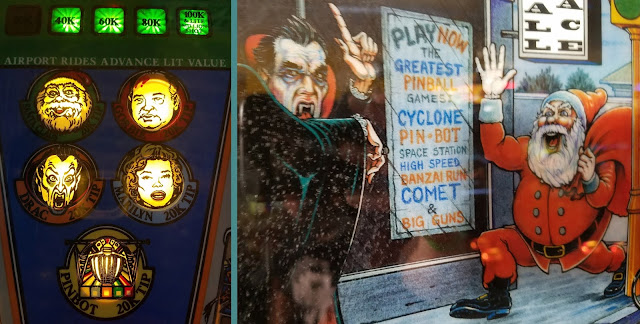 These are closeup photos of some of the artwork on the Taxi pinball machine playing surface.  This game was created by Williams and made its debut in 1988.  You have to give them credit for the creativity behind the story of this game.  There can't be too many things in this world that found a way to involve Marilyn Monroe, Count Dracula, Mikhail Gorbachev, a giant robot, and a deranged looking Santa Claus in a story that's centered around a taxi cab driving to the airport. 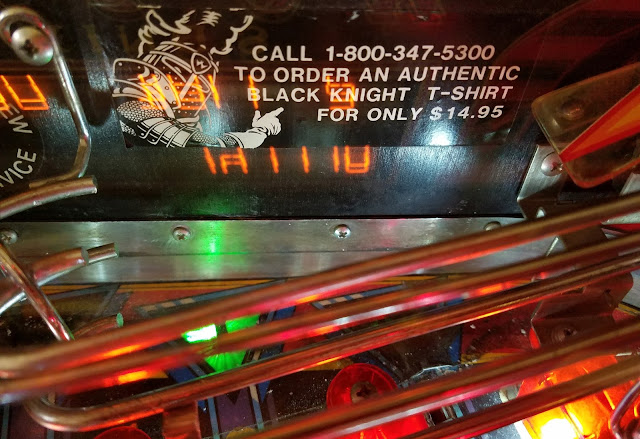 This was on the inside of the Black Knight 2000 pinball machine, which was released by Williams in 1989.  I wonder if the t-shirts are still available. 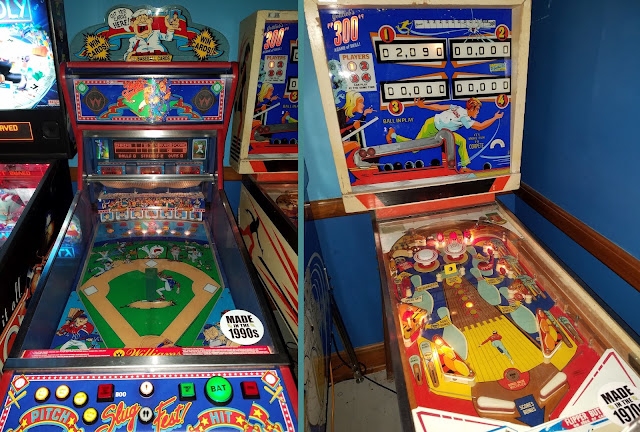 Finally, these two games are off in a separate room from the main arcade.  The baseball themed one on the left is called Slug Fest.  It was made by Williams and first appeared in arcades in 1991.  At first glance, it looks like a pinball machine, but it isn't.  When you play, a "baseball" pops up from a launcher built into the pitchers mound, and you use a single bat flipper to hit it into the outfield.  After the game is over, a dispenser built into the front of the machine gives you baseball cards as a prize.  I know that I've come across this a few times as a kid (including Knoebels), but it wasn't something that I saw too frequently.

The game on the right was released in August, 1975 and is a traditional Gottlieb pinball machine.  This one is called "300" and is bowling themed.  I haven't often gotten to see, let alone play a pre-80's pinball machine.  In fact, I rarely saw machines like these back in the 80's, as they were quickly replaced by modern tables with licensed characters and new game play features that became standard.  It's very cool to be able to come to an arcade and play through three decades of pinball under one roof.