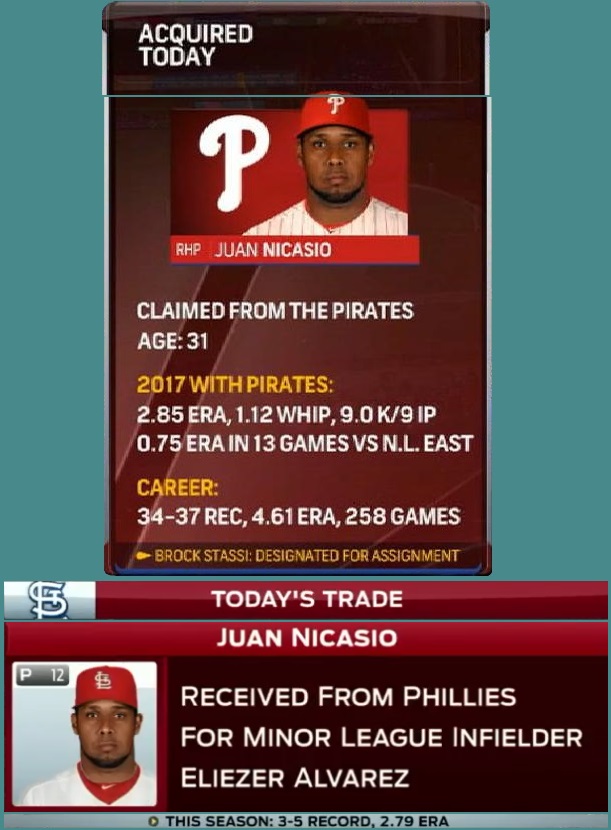 Juan Nicasio (relief pitcher)
Pittsburgh Pirates  Philadelphia Phillies  St. Louis Cardinals
Last Thursday, the Phillies claimed right handed reliever Juan Nicasio from the Pittsburgh Pirates.  He made his Phillies debut on Friday against the Marlins, entering in the bottom of the 8th and getting Giancarlo Stanton to ground out on three pitches.  The Phillies were down 0 - 1, but managed to score two runs in the top of the 9th to beat the Marlins, earning Nicasio the win.

On Sunday, Nicasio came into the game in the 7th.  Facing the Marlins again, he retired Marcell Ozuna, Brian Anderson and Tomas Telis on 17 pitches, striking out Anderson.

And so ends the Phillies career of Juan Nicasio.  Five days, twenty pitches, one strikeout, one win, no base runners allowed, and a quick flip to St. Louis for one of their top 20 prospects.  Not bad for a guy they plucked from the waiver wire.