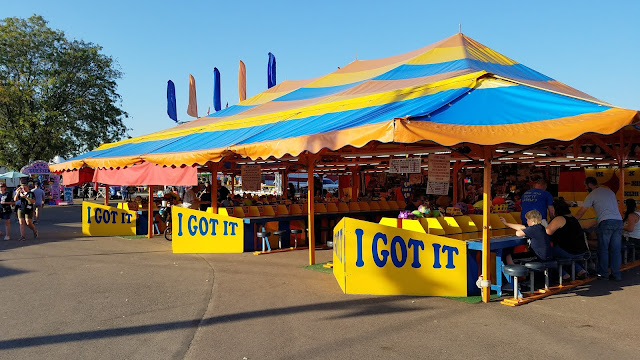 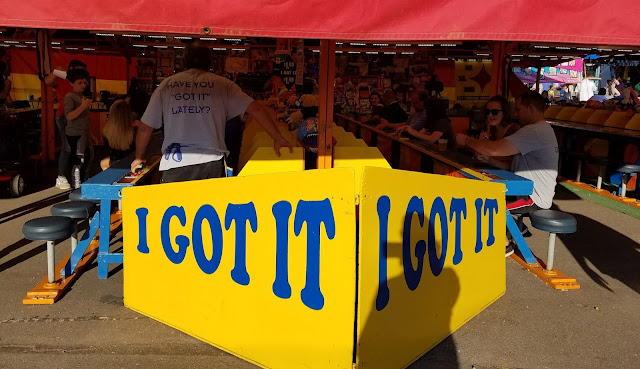 I Got It
Bloomsburg Fair - Bloomsburg, PA
This is one of my favorite carnival games of all time, and it's an iconic part of the Bloomsburg Fair experience.  If you've ever played it, you could probably hear the guy's voice in your head when you read the title of this post.  It's an especially good place to go if it starts raining while you're at the Bloomsburg Fair because you can sit, relax and toss some rubber balls to win a prize without spending a fortune. 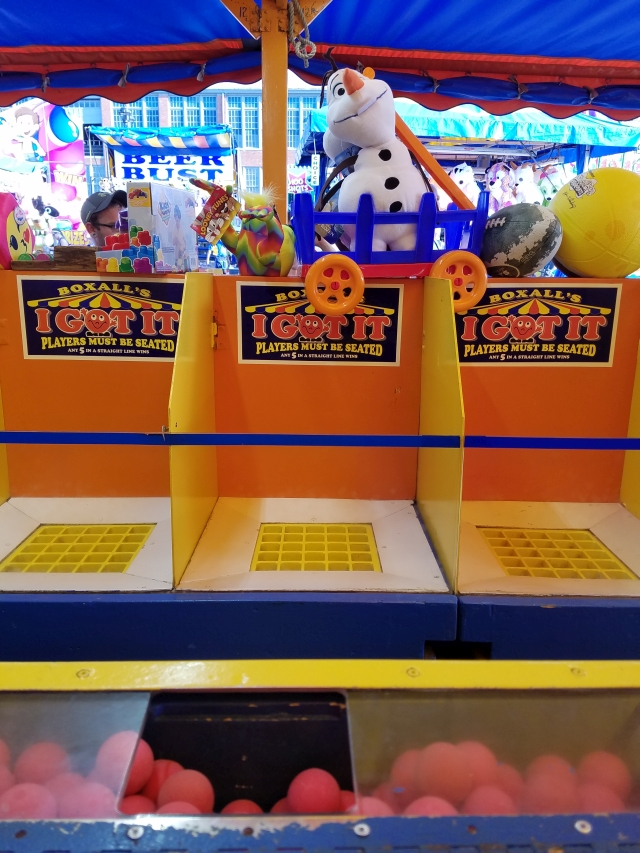 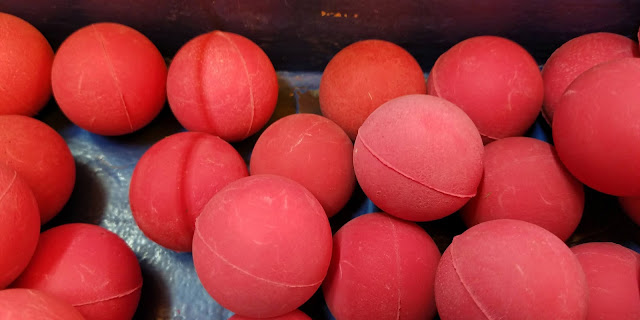 It costs a dollar to play, and it's run like bingo where you have to wait for the start of a game before you can play.  The games move pretty quickly.  I'm guessing that each one lasts about three or four minutes on average.  When a game starts, the caller on the loudspeaker will tell everyone to toss in ball #1.  At that point, you toss one of the small red rubber balls into the box in front of you, where it will bounce around for a bit and eventually settle into one of the squares.  Then, after a brief pause, he calls to toss in ball #2 and so on.  In other words, you don't just sit down and start throwing balls willy nilly; you've got to throw one at a time as they're called, or else you'll be disqualified. 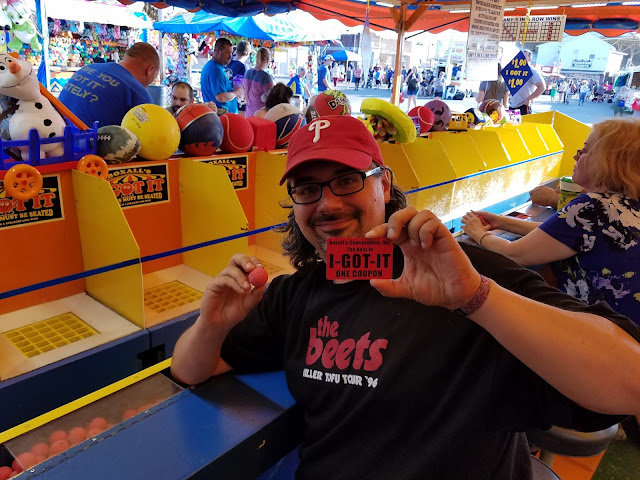 The game keeps going until someone gets five balls in a row on their game board.  When they do, they're supposed to shout "I Got It".  The game then pauses while someone comes over to check that you have five in a row, and that you don't have any extra balls in the game.  If you win by yourself, you get a ticket that can be exchanged for a prize.  If two or more players win at the same time, each of the winners gets three tokens that are each good for a free game.
There are two challenges that are built into this game.  Sometimes you throw a ball into the box and it gets stuck.  If that happens, you pretty much just have to wait until the next ball is called, and then try to hit the stuck ball with the next ball so that both of them fall into a square.  The other challenge is the random people who walk past the tent and shout "I Got It", but the folks in charge here have been running this game for at least three decades, so they've gotten pretty good at tuning out the jackasses. 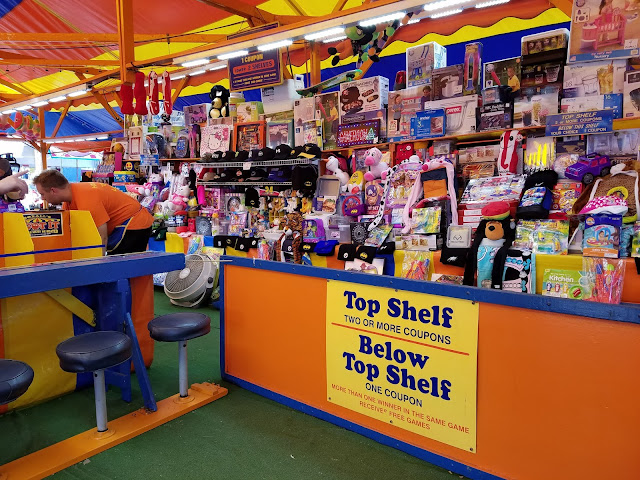 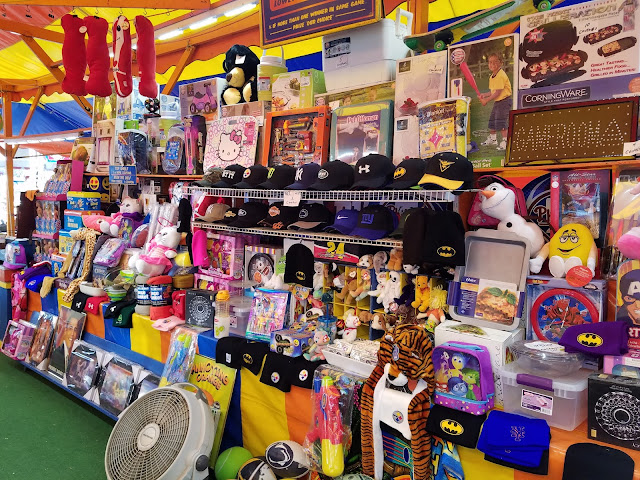 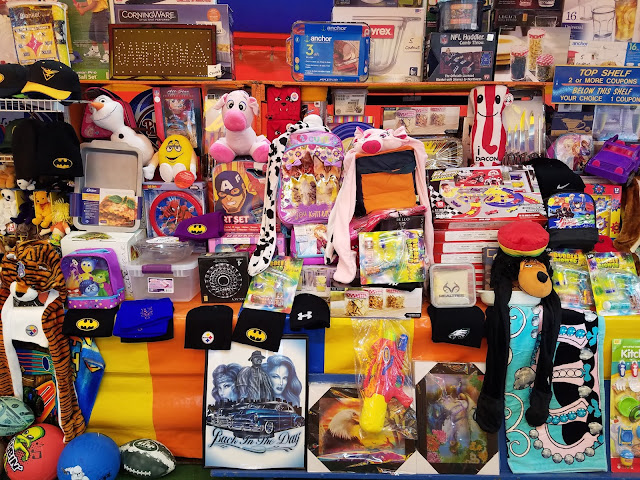 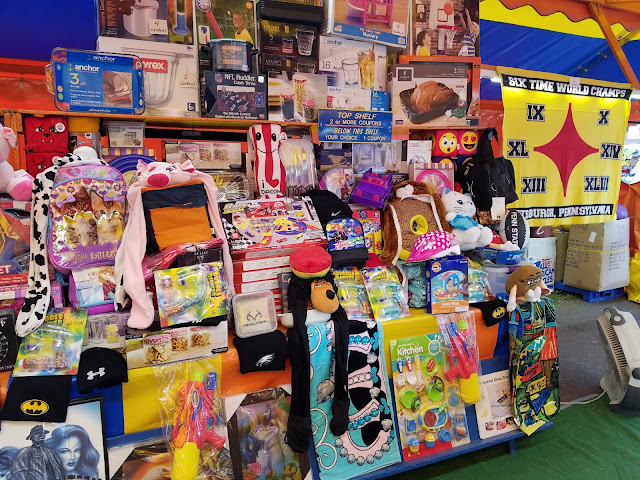 When you're finished playing, you bring the prize coupons you've collected up to the front and trade them in for something.  There are two levels of prizes: the stuff on the top shelf costs two prize tickets, while everything else costs a single prize ticket.  The prizes are generally pretty good.  There's a little something for everybody: toys, sporting goods, housewares, kitchen appliances, etc.  If I had to guess, I'd say their value is in the $5 to $25 range.
Like most good carnival games, the real joy of this is the game itself.  You're not going to win anything that's going to change your life, but it's fun and it's a good way to spend some time off your feet and out of the hot sun for a little while.  My grandmother was a sucker for I Got It back in the day, and I guess I am too because I play at least two or three games every year.