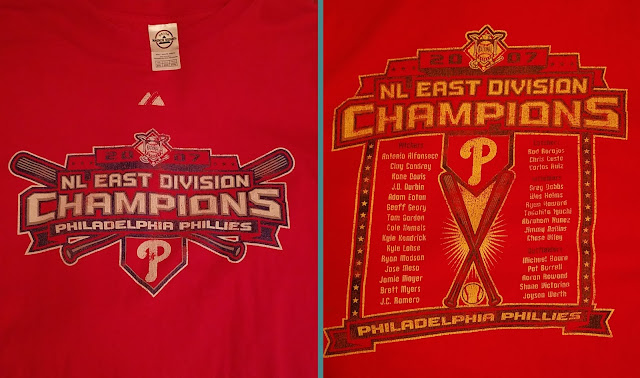 NL East Division Champion t-shirt
Philadelphia Phillies (2007)
This is my favorite shirt to wear when I go to a ballgame.  It fits just right, and it's broken in to be super comfortable, but those aren't the only reasons why I love it.  When I took it out of the drawer to wear to the game today, I felt like Jerry Seinfeld in the episode where he discovers that his favorite shirt, "Golden Boy", is starting to wear out.  It hasn't got any holes or anything like that, but it's really starting to show its age, and I don't think it'll take too many more washings before "Red Boy" will have bitten the dust.
I know this probably sounds a little silly, but this shirt is very special to me.  One day in October 2007, my dad, grandma, grandpa and I had dinner together at my grandparents house.  This was a weekly tradition which happened every Wednesday at the time.  When Dad got to the house, he said he had a surprise for me, and he handed me a plastic grocery bag with this shirt neatly folded inside.
Looking back on that day, I can see that it was a pivotal moment in my life.  I had very recently moved back home to my grandparents house, and was just a few weeks in to my first semester of college.  In the words of Chris Rock, it was obvious that high school had busted my ass, so I was still pretty scared that I wouldn't be able to cut the mustard.  All I knew is that I didn't want to let my family down, and that I was going to bust my ass to make them proud of me, and hopefully make up for all of the times I've screwed up and disappointed them over the years.
This was also a pivotal moment for the Phillies.  They were trailing the New York Mets in the NL East by 7 games with 17 left to play, and they dominated in the final weeks of the regular season, going 13-4 to pass the Mets on the last game of the year to win the NL East Divisional Championship and knock the Mets out of the playoffs altogether.  It was the first time the Phillies had reached the post season since 1993, and it would be the first in a stretch of five consecutive divisional titles from 2007-2011 - a span that included two pennants and a World Series Championship in 2008.  While I had just started college and had it all out in front of me, the Phillies had just opened their window of contention, and they had it all out in front of them.
I think that if life were a video game with save points, I would have saved my game on the morning of the day that Dad gave me this t-shirt.  It was a moment in time where everything was good.  My grandparents were alive.  My dad was in good health.  I was at the beginning of a four year long journey with college, and my future was just waiting to unfold in front of me.  And to top it all off, there was five years of Phillies playoff baseball on the horizon.  Yes... if life were a video game, I would have kept that save file on my memory card, and I would go back and play those years over and over again.
This simple Phillies t-shirt brings all of those memories flooding back to me.  So many things have changed over the past ten years - some have been positive; others, not so much.  I'm going to wear it to the game with my Dad today and then it's getting retired.  Ten years of regular wear is pretty good for a t-shirt, and I don't ever want it to get to a point where it's not in a good enough condition to wear.  It's my favorite t-shirt, after all.