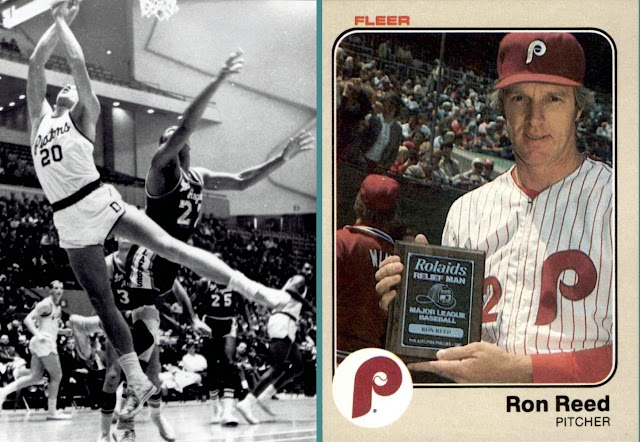 Ron Reed
Relief Pitcher - Philadelphia Phillies (1976-1983)
Today is the 75th birthday of a former Phillies reliever who has had an especially interesting career.  The 6'6" Ron Reed played basketball for Notre Dame.  In 1965, he was drafted by the Detroit Pistons and signed with the Atlanta Braves.  For three years, Reed was a two sport athlete who pitched in the Braves minor league system while playing for the Pistons.

Reed's basketball career ended after the 1966-67 season when he was brought to the Major Leagues and decided to dedicate himself to baseball full time.  He was traded to the Phillies in December 1975 and was a key contributor out of the Phillies bullpen for their years of contention in the late 70's and early 80's, and was a member of the 1980 World Series Championship team.  He retired after the 1984 season after pitching for 18 seasons in the big leagues.

The 1983 Fleer card in this photo is one of my favorite Phillies cards.  Reed was a good reliever, but he never won the Rolaids Relief Man Award in his career.  Maybe he got a label maker and stole it from Bruce Sutter when the Cardinals were in town?