Hazleton Shopping Center In The 80's 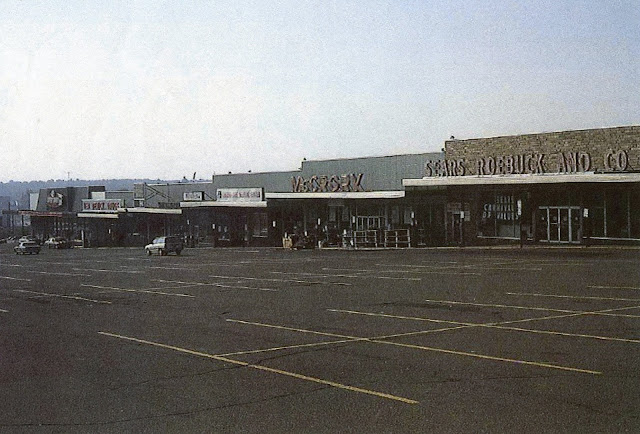 Hazleton Shopping Center (early 80's)
Broad Street - Hazleton, PA
The Acme Super Saver grocery store and Rea & Derick drugstore (far left) were still in business throughout the 80's.  My grandmother worked at Rea & Derick throughout my childhood - one of the benefits of which was that she brought home all of the loose baseball and basketball cards from packs that kids opened in the store.

I don't remember which stores were in the middle.  The two stores on the right are a McCrory's and a Sears & Roebuck department store.  My cousin Tommy had a store called Pet Paradise at the back of the McCrory store until Wal-Mart came to town.

The Sears would become a Blockbuster Video in the early 90's, and the McCrory's sat empty for a little while after the chain went out of business.  It eventually became a Dollar General.  The Acme became an Insalaco's grocery store for a short time.  When that chain closed, the store sat empty for about 15 years until it became a Save-A-Lot grocery store.