Meeting a Drive In Icon 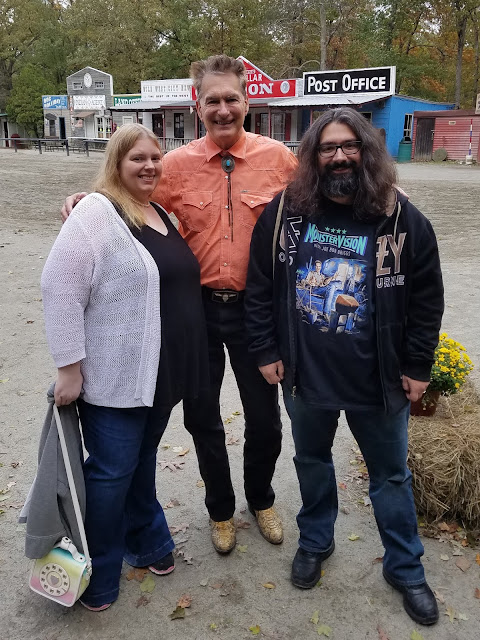 When I was a teenager, I loved watching MonsterVision on TNT.  As much as I loved the movies, the best part of the show was the host, Mr. Joe Bob Briggs.  Before it began, he would share facts and stories about the movie, and he'd give a preview of what to expect with the Drive In Totals.

A few months ago, I saw an advertisement for Shudder, a streaming service dedicated to horror flicks, and I was very excited to see that they brought Joe Bob back for a marathon of movies called The Last Drive In.  It made me feel like a teenager again, staying up late to watch Sleepaway Camp, Basket Case and other awesome horror movies with the wit, wisdom and humor of Joe Bob throughout.  If that isn't awesome enough, it was announced last month that Joe Bob would be coming back to host a Thanksgiving marathon called The Dinners Of Death, a Christmas marathon called A Very Joe Bob Christmas, and a new marathon of movies in 2019.

Earlier today, we went to Wild West City theme park in Stanhope, NJ for the Mr. Hush Weekend of Fear horror convention.  There were quite a few very cool vendors and guests, including Brian O'Halloran from Clerks and Kevin Van Hentenryck from Basket Case. and the park itself was incredible with actors performing a wild west bank robbery.  However, the highlight for us was getting to meet and talk with Joe Bob.  We got there pretty early before it got too busy, so we were lucky to spend over an hour talking with him about movies, pop culture and life in general.  He was genuinely one of the nicest and most interesting people I've ever had the privilege of meeting.

I usually have a little bit of anxiety talking to people in general, but especially celebrities.  It's not really that I'm star struck.  I just don't always know a ton about the person, so other than telling them that I'm a big fan of their work, I'm not sure what to say.  That wasn't a problem with Joe Bob at all.  He was just such a cool, friendly, laid back guy, and we have a lot of interests and opinions in common.  I feel like we could have hung out with a few beers and chatted for hours.

He signed two of his books for us before we left, and I look forward to reading them.  He also took this photo with us out in the front of the building.  My wife and I spent the entire drive home talking about how awesome the day was.  I'll never forget it.