In The Not Too Distant Future... 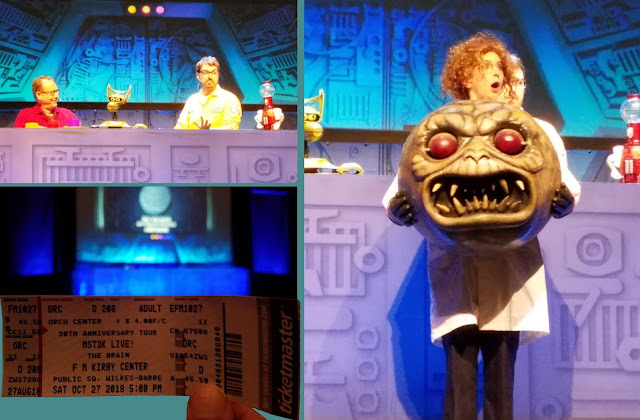 Mystery Science Theater 3000
30th Anniversary Tour: The Brain
Wilkes-Barre, PA - October 27, 2018
I wasn't sure what to expect when I first heard that MST3K was going on the road.  I was kind of thinking that it would be something like the Fathom Events RiffTrax movies.  Don't get me wrong - those RiffTrax events are a lot of fun, but the MST3K tour blew that out of the water entirely.

The stage was set up to look like the Satellite Of Love.  They showed the 1988 horror cult classic The Brain, and the backdrop of the MST3K commentary was a game show with original host Joel Hodgson and Tom Servo on the red team, and current host Jonah Ray and Crow on the yellow team.  Rebecca Hanson (Synthia Forrester and the voice of Gypsy) was the host of the show and did a fantastic job.  The entire show was hysterically funny, and they even brought out the actual Brain prop from the film - and squirted the audience with it.