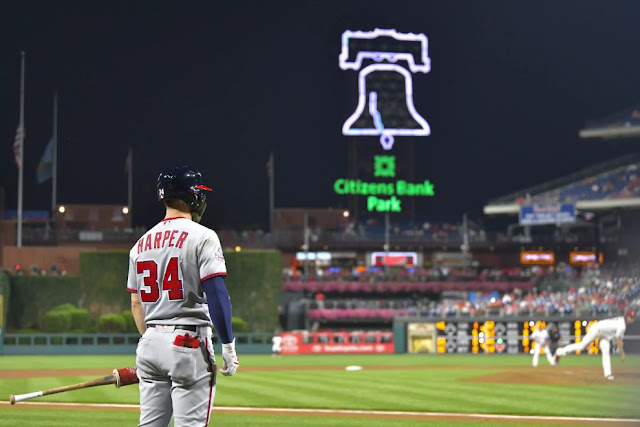 When I was 12 years old, my sister made me a mixtape of songs that she thought I would enjoy.  Included on this tape was a cool dystopian rock song by Warrant called April 2031.  It was about a world that has suffered from an environmental catastrophe.  I remember thinking how far off in the future it was.  Hell, I would be 50 years old by then.

Earlier today, I learned that April 2031 will be the start of Bryce Harper's final season in Philadelphia.  It was reported this afternoon by Jon Heyman that the 2015 NL MVP had just signed a 13 year contract with the Phillies for $330 million dollars.  It includes a full no-trade clause, and no opt-out clauses.  Jon Morosi reported that Harper had a four year offer from the Dodgers that would have paid him $45 million per season (his contact with the Phillies will pay him about $25 million per year), but he preferred to play in Philadelphia due to the long term security, the commitment by team owners to winning a championship (in 2019 and in the future), and Citizen's Bank Park, which seems like it was custom built for the power lefty to put up massive numbers.

This contract is right up there with Pete Rose and Jim Thome as one of the most important free agent signings in franchise history, and this winter is among the most successful off-seasons for any team in the history of the game.  Going into the 2019 season, our outfield will now include two former NL MVPs with Harper and McCutchen.  With this signing and the trades made with Seattle and Miami, the Phillies have brought in three 2018 All-Stars (Harper, Segura and Realmuto).  The bullpen has had a massive upgrade with the addition of Robertson, Nicasio, Álvarez and Pazos.  Rhys Hoskins is back at 1B where he belongs.  This is going to be a very exciting season!

On a side note, if you're interested in the song April 2031, it's track 3 on the Dog Eat Dog album.  It was released by Warrant in August 1992 - two months before Bryce Harper was born.  By the time he's entering his last season in April 2031, I'm hopeful that we'll have a number of World Championships to fly alongside the 1980 and 2008 flags, and we'll be talking about the final season of a player who will wear a Phillies cap on his Hall of Fame plaque.