The Return of Halftime Heat 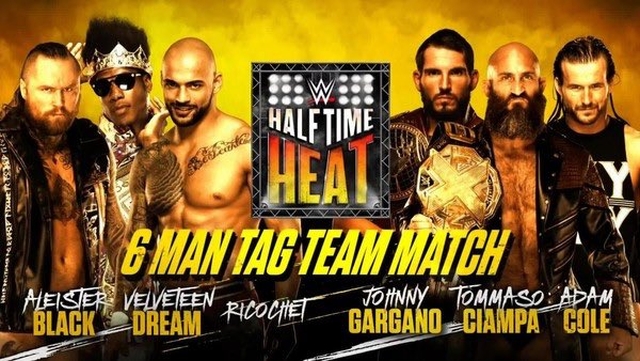 The last time there was a Halftime Heat, I was 18 years old and the company was still called WWF.  It was called Halftime Heat because, at the time, there was a wrestling show called Sunday Night Heat, and the match aired on Sunday against the halftime performance at Super Bowl 33.

The event was held at the America West Arena in Phoenix, and it was promoted as an "empty arena match".  There were no fans in attendance - just The Rock, Mick Foley (as Mankind) and the referee.  In one of the most creative matches of the Attitude Era, Mankind defeated The Rock to win his second WWF World Heavyweight Championship.

Later today, twenty years after this match, WWE will be airing a second Halftime Heat to lure fans away from Maroon 5 at Super Bowl 53.  This time around, the match will be taking place at the WWE Performance Center in Orlando, Florida and will feature a six man tag team match between Aleister Black, The Velveteen Dream and Ricochet taking on Tommaso Ciampa, Johnny Gargano and Adam Cole.  It's bound to be interesting as it's the first time Ciampa and Gargano will be teaming up since the former turned on the latter after DIY failed to win the NXT Tag Team Championship.