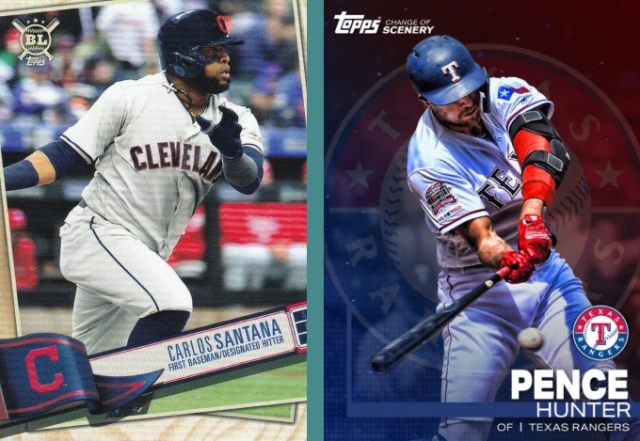 During Spring Training, there was a lot of speculation over how many Phillies would be All-Stars by mid season.  The general consensus among fans and podcasters was that Harper and Realmuto would definitely get voted in, and there was potential for Rhys Hoskins, Aaron Nola and Jean Seugra as well.  It wasn't an outlandish prediction.  The Phillies added four players over the winter who were All-Stars in 2018.  As it turned out, the Phillies won't have any starters on the 2019 All-Star Team, and we'll have our third consecutive season of only one All-Star representative who will ride the bench to start the game (Realmuto), but two of my favorite Coffee Cup Phillies from the past have experienced a career resurgence and have been voted to start for the American League this year.

The Phillies signed Carlos Santana to a three year contract prior to the 2018 season.  He was a productive bat in the lineup (and to televisions in the clubhouse), but it's fair to say that it wasn't his best season.  While I would have loved to see him stay with the Phillies, his signing caused a problem because it forced Rhys Hoskins to left field - a position he should never play again under any circumstance.  Santana was traded with J.P. Crawford to the Mariners for Jean Segura and Juan Nicasio.  Ten days later, the Mariners flipped Santana to the Indians for Edwin Encarnación, and Santana has been having a fantastic season in his return to Cleveland.  He will be the starting first baseman for the 2019 AL All-Star Team today.

Hunter Pence was acquired by the Phillies in 2011 after a mid-season trade with the Astros.  He wasted no time endearing himself to the city after scoring the winning run in extra innings shortly.  In the post-game interview that night, he was asked what was going through his mind as he rounded third base, and he responded with "Great game.  Let's go eat."  The phrase became to the 2011 NL East Champion Phillies what Brad Miller's Bamboo briefly became to the team this year.  Sadly, the good times didn't last into 2012.  The team fell into a tailspin and began trading away all of the star players for prospects.  Pence was traded to the Giants for Tommy Joseph, Nate Schierholtz and Seth Rosin.  None of the players that we received in that deal did much for the Phillies, while Pence helped lead the Giants to win the 2012 World Series.  Prior to the 2019 season, most of the baseball world had assumed that this was the end of Pence's career.  He was a 36 year old free agent coming off of several seasons of sharply declining production, and there weren't very many rumors of teams that were interested in signing him.  In fact, he didn't sign with the Texas Rangers until the first week in February, and it was a minor league contract with an invitation to Spring Training.  However, Pence has been on fire and has already hit more home runs in half of 2019 than he had in each of the previous four seasons.  From a minor league contract that didn't guarantee a roster spot, Pence was voted to be the AL All-Star Team's starting designated hitter.  Unfortunately a strained groin will keep him from playing, but it's an impressive comeback story nonetheless.