Halladay In The Hall 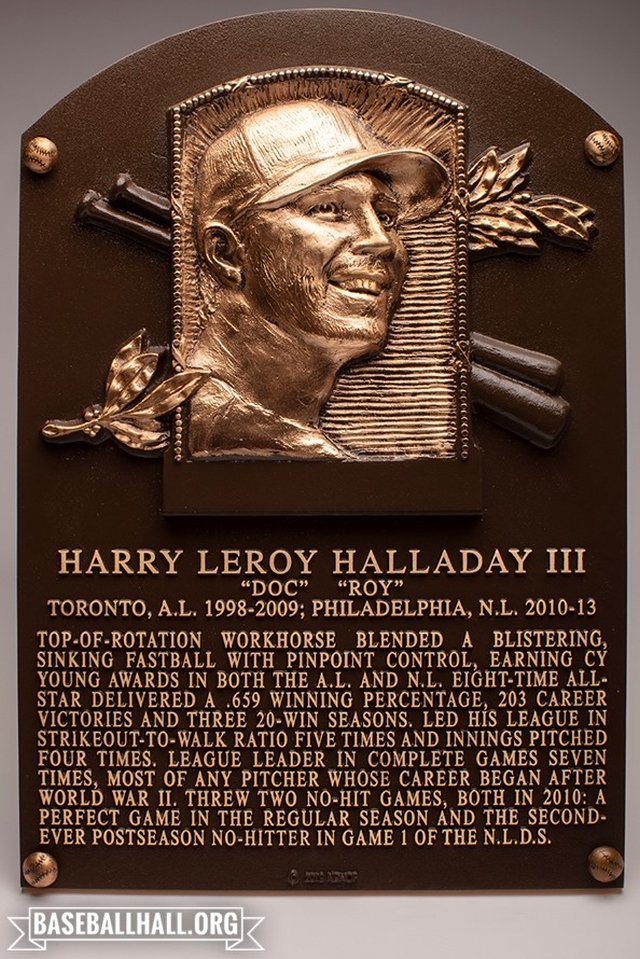 Roy Halladay
2019 Baseball Hall Of Fame
Today, the National Baseball Hall of Fame honored its 2019 inductees.  Among them is one of the greatest pitchers of our generation, and one of the best players to ever wear a Phillies uniform.

Doc became a Phillie just under ten years ago when we traded Kyle Drabek, Travis d'Arnaud and Michael Taylor to the Blue Jays for the ace.  He went on to have a dominant season in 2010, winning the NL Cy Young Award and finishing with a record of 21-10 with 219 strikeouts and only 30 walks.  He was the first pitcher to throw over 250 innings in a season and allow 30 or fewer walks since Grover Cleveland Alexander in 1923.  In addition to this, he pitched a perfect game against the Florida Marlins on May 29th, and he threw a no-hitter on October 6th in Game One of the NLDS against the Cincinnati Reds.  The only base runner that night was current Phillie Jay Bruce, who walked in the fifth inning.  That game was only the second playoff no-hitter in the history of the game, joining Don Larson's perfect game in the 1956 World Series, and it was the first time that a pitcher threw two no-hitters in a season since Nolan Ryan in 1973.

Sadly, Doc will not make his induction speech.  Twenty months ago, he died at age 40 when his plane crashed into the Gulf of Mexico.  His legacy will live forever in Cooperstown and in the memory of the players and fans of this game.  Congratulations, Mr. Halladay, and thank you for the memories.