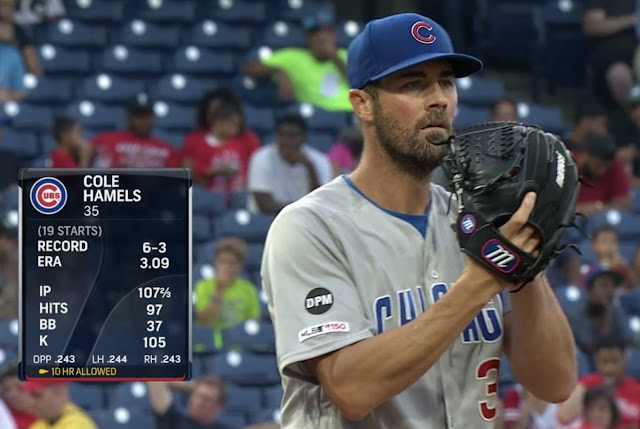 Cole Hamels
Chicago Cubs (2019)
Cole Hamels returned to Citizens Bank Park for the first time since he was traded on July 31st, 2015.  The last time he took the mound in Philadelphia, he was pitching against the Chicago Cubs, and in his last start as a member of the Phillies, he threw a no-hitter.

Today, he took the mound for the Cubs against the Phillies, and he did so wearing a DLM patch in tribute to Phillies president David Montgomery, who passed away in May.

Phillies fans in attendance gave Cole Hamels a standing ovation in his return to Philadelphia, both when he took the mound and in his first at bat.  He may be a member of the Cubs this season, but Cole Hamels will always be a loved and respected icon in Philadelphia.  He will become a free agent at the end of the 2019 season, and nothing would make me happier than to have the Phillies sign him so that he can end his career where it began.

Tonight's game was also the first official game with Charlie Manuel as the hitting coach, and the team wasted no time in declaring the start of hitting season.  Cole had a warm reception from the fans, but the Phillies offense welcomed him by scoring 8 runs off of the left hander, knocking him out of the game with no outs in the third inning.  He was relieved by Alec Mills.  The offense wasted no time in loading the bases to set up J.T. Realmuto to hit a grand slam that gave the Phillies a 10 - 0 lead.  As Realmuto rounded the bases, the fans in attendance chanted Char-lie, Char-lie in what may have been the first standing ovation and chant for a hitting coach in the history of baseball.