I've Believed As Many As Six Impossible Things Before Breakfast. 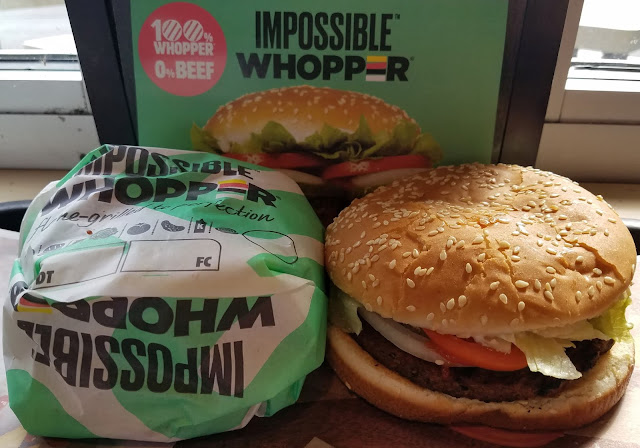 Impossible Whopper
Burger King (2019)
Earlier this year, I had Impossible Meat when I tried the Questlove Cheesesteak at Citizens Bank Park on Opening Day.  It was good, and it made a without meat that tasted more or less like a regular cheesesteak at the ballpark.

The Impossible Whopper is more of the same.  It looks like meat, it tastes like meat, and when you put it on a bun with lettuce, tomato, onion, pickles and condiments, it's not much different from a regular Whopper.  The main difference I noticed is that it doesn't smell like a Burger King hamburger.


It's cool that they make it, and I hope that it helps out vegetarians who have been craving a Whopper, but unless they suddenly become less expensive than a traditional Whopper and I'm strapped for cash, I think this will be my last Impossible Whopper.

On a side note: maybe it's just me, but the Impossible Whopper logo reminds me of an upside down German flag.