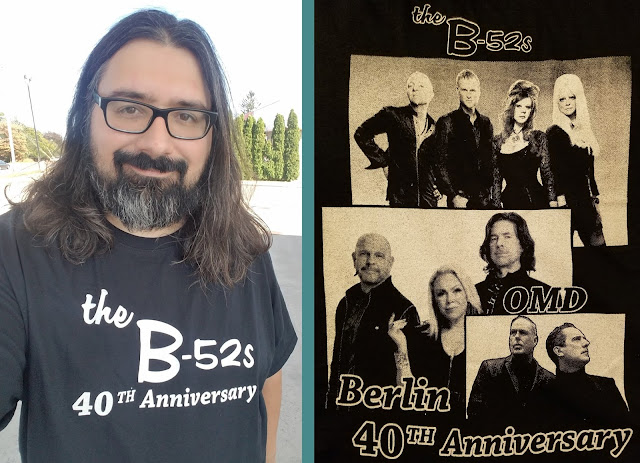 Over the past four decades, I've been to quite a few shows and events across the country, but it only occurred to me yesterday that the army bootleg t-shirt sellers in the parking lot after the show may be unique to Philadelphia.  In fact, I can't think of a single concert, baseball game or pro wrestling event that I've seen in Philadelphia which didn't end with twenty different people yelling "half price" at the people who are exiting the show.  I've also never noticed this anywhere outside of Philly.

The shirts are never direct copies of the official merchandise sold in the venue, but they're much cheaper.  The "half price" shouts are deliberately vague, probably in the hopes that you'll give them $20 bucks for a shirt at a show where they're being sold for $40.  You've got to haggle.  Your best bet is to start the conversation by offering $5.  They'll likely counter with $10, and you're already settled on a reasonable price to pay for a concert shirt.  It'll be a quick negotiation and transaction, as the sellers don't want to get popped by police or security for selling bootleg shirts.

You might be tempted to pass by with the assumption that it's lower quality merchandise.  Granted, it's not fancy.  They're usually just bulk Hanes t-shirts with screen printed graphics, but it's not going to fall apart after one wash or anything like that.  The designs are often quirky and weird, but that adds to their charm - particularly in the shirts available in the parking lot after a Phillies game.  Do you want a snazzy "Jesus Hates The Cowboys" shirt?  Look no further.

This shirt came from the B-52's / OMD / Berlin 40th anniversary concert in Philadelphia last night.  I wasn't planning on buying a shirt at all, and I certainly wan't about to drop $35 on one after paying $25 just to park the car, but ten bucks for a shirt in my size with a simple design on the front and all three bands on the back.  Sure, why not?