The Return Of The Macho King 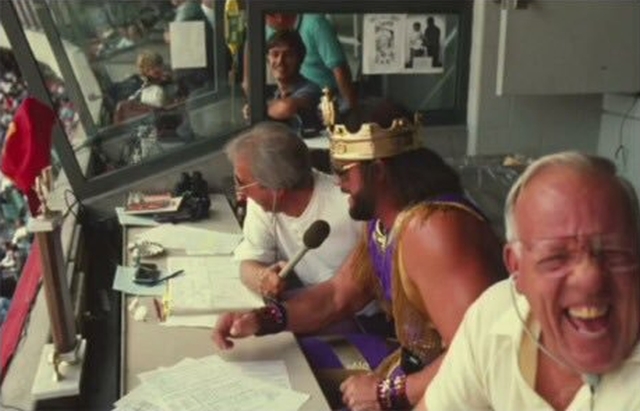 San Diego Padres @ Cincinnati Reds
September 21, 1989 - Cincinnati, OH
Thirty years ago today, the Cincinnati Reds were having a rough time.  Manager and franchise hero Pete Rose was banned from baseball for life less than a month earlier, and the team was on a nine game losing streak.  They were also saddled by owner Marge Schott, an open and unapologetic bigot whose behavior cast a negative shadow over the team until from 1984 until she was forced by Major League Baseball to sell her stake in the team at the end of the century.

In an effort to bring a little fun to the ballpark, Reds broadcaster Marty Brennaman invited former WWF World Heavyweight Champion "Macho Man" Randy Savage to the broadcast booth to do some color commentating.  Savage was in the peak of his career at the time.  His match with Hulk Hogan headlined Wrestlemania V earlier that year.  It was one of the most memorable feuds and main events in the history of professional wrestling.  Savage showed up to the stadium in full gear, including his crown and scepter that he used in his villainous "Macho King" gimmick that had just begun earlier in the month.

At first, the guest appearance was a huge success.  Although many fans that night may not have known it, Randy was a professional baseball player prior to his wrestling career.  In fact, he spent the 1974 season with the Tampa Tarpons, the Reds minor league affiliate in the Florida State League.  Everyone was having a great time with Randy in the booth, including the fans, the umpires and the players.  All-Star center fielder Eric Davis even flexed his muscles at Savage from the field.  Naturally, toxic owner and all-around horrible human being Marge Schott had to butt her nose in and spoil the fun for everyone in an incident that was reported by the Dayton Daily News the following morning (click here to enlarge). 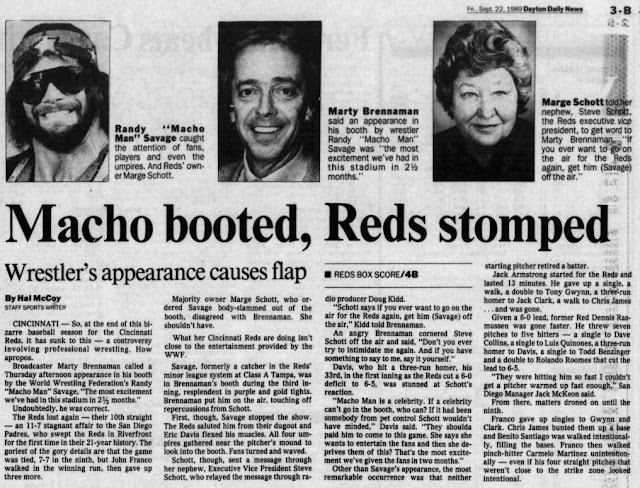