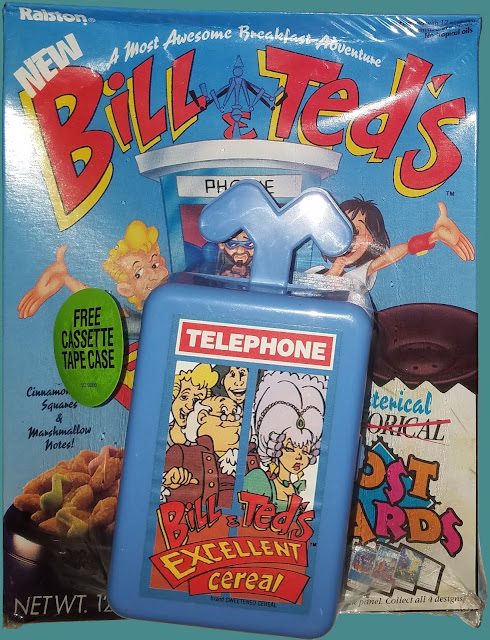 Bill & Ted's Excellent Cereal
Ralston (1991)
I was a huge Bill & Ted fan when I was a kid.  My grandfather took me to see the first Bill & Ted movie at the Church Hill Mall Theater when it first came out, and I watched the cartoon series that came out not long afterward.  I have a vivid memory of staying home when I was sick (which didn't happen often), and my grandfather rented Bill & Ted's Excellent Video Game Adventure from Blockbuster.  It wasn't the greatest game in the world, but it was a nice surprise for a sick kid, and it was definitely better than school.

Before I moved to Florida with my Dad, I spent the summer with him.  He knew I loved all things Bill & Ted, so when I got there, he had a box of Bill & Ted's Excellent Cereal waiting for me to have for breakfast.  I remember thinking it was weird that he kept it in the refrigerator, but bugs were a bigger problem in South Florida compared to Pennsylvania.

The box came with two prizes.  One was a cassette tape case that looked like the phone booth from the cartoon series.  Unlike most cereal prizes which came inside the box, it was shrink wrapped to the front of the box.  It only held about four loose tapes, so it became a toy that my action figures used when they wanted to travel back in time.  The other surprise was on the back of the box where you could cut our and collect all four historical postcards.

I just ordered this unopened box on eBay.  As you can see, I'm just an ordinary, mature adult who purchases 28 year old cereal off of the internet - not a strange weirdo at all.  As luck would have it, the box arrived on Saturday and included this Christopher Columbus postcard on the back. 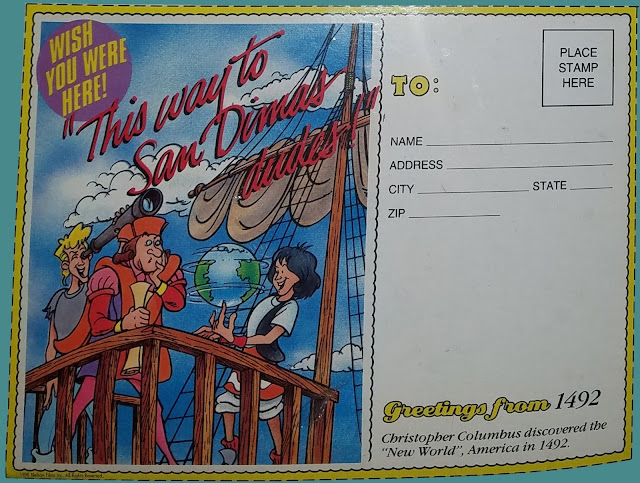