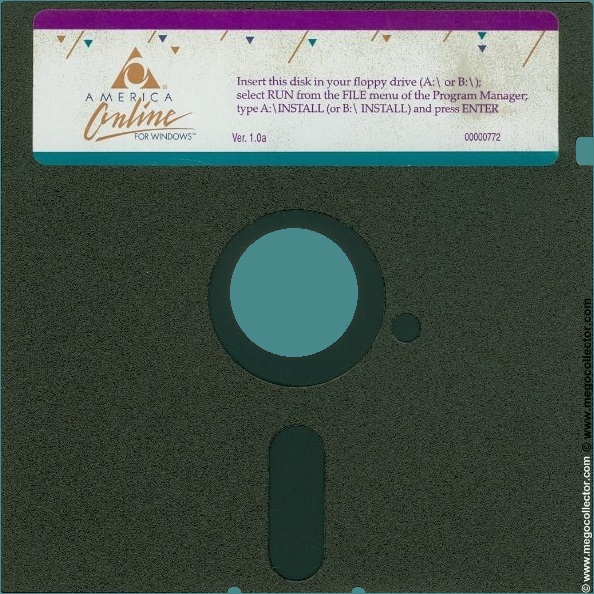 Free Trial Installation Disk
America Online (1995)
From the time I was a teenager until at least my mid-twenties, every house in America got AOL free trial discs sent to their home at least once a week.  I remember in the mid 90's, they would sometimes be 3.5" disks, but that didn't last too long before CD Rom discs took over.

I remember one of the disks that I got had a form that you could send back if you needed a different format than the one that they sent you.  One of the options was a 5.25" floppy disk.  These were obsolete for about a decade by this point.  Even my grandmother's old Tandy from the mid 80's used the harder, smaller 3.5" disks, so I was pretty surprised to see it was an option.  Frankly, I didn't think a computer that only had a 5.25" disk would be capable of going online.

I sent away for it, and sure enough it came in.  My computer didn't take 5.25" disks and I couldn't get AOL anyway since they never had a local phone number for West Hazleton, but it was an oddity so I was glad to have it anyway.  It's gotten lost over the years.  The one in this picture is from MegoCollector.com.  According to their article about it, they sell on eBay for a hundred bucks these days.  It's crazy to think that the junk mail of my teenage years that people couldn't wait to throw away are sought after collectibles in 2019.  It makes you wonder what things that are junk today will be collected and sold by people in the future.