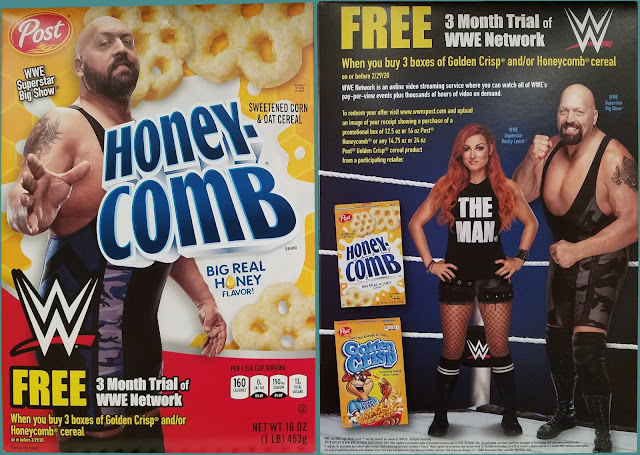 Honeycomb Cereal
Post (2019)
The Big Show hasn't wrestled since November of last year, so his appearance on the front of Honeycomb boxes to promote three free months of the WWE Network came as a bit of a surprise to some wrestling fans.  However, unlike scripts written by Vince McMahon's creative team, this idea has logic and continuity.  Thirty years ago, the great Andre The Giant appeared in a Honeycomb commercial along with a robot and a group of cereal munching children.  I can't say for sure, but I think they may have dubbed over Andre's voice with another actor (his French accent was very thick and sometimes difficult to understand), but the Hall of Famer looks to be having a great time filming.  He was said to have loved his time working on The Princess Bride.  It's a shame he didn't get to do more acting prior to his death in January 1993.

Although Andre was never pictured on the actual box of Honeycomb Cereal, he was one of eight posters that you could find as the prize in box back in 1989.  The asking price on eBay for the posters range between $10 and $50 with the Andre one tending to be the most expensive of the series.