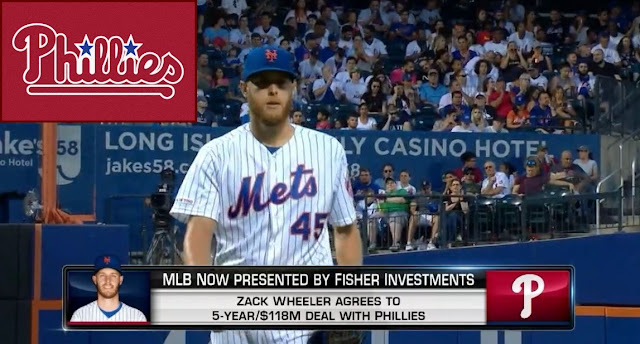 It took all of two days for my off-season projection to get blown all to hell.  I was mildly disappointed to see Mike Moustakas sign with the Reds and Dylan Bundy get traded to the Angels, but that pales in comparison to the heartbreak in seeing what happened with Cole Hamels.  The stage was set for Cole to return to Philadelphia and end his career where it began.  Instead, he'll cash an $18 million dollar check to spend the year pitching for the Braves.

The Phillies did make a splash today in the free agent market, but I'm not sure how to feel about it.  Zack Wheeler is 29 years old and he has a hell of a fastball and has the potential to develop into an ace, but he's also got a history of injuries and giving up big innings.  He's definitely an upgrade over everyone not named Nola in the Phillies 2019 rotation, but five years at $118 million dollars is a lot of money for a guy who has yet to live up to his potential.

This could turn out to be a fantastic deal.  Zack wouldn't be the first guy to get a change of scenery and make that one last adjustment that turns a pitcher from good to great, but it's far from a sure thing.  It's tough to say what will happen, but I've got high hopes... high apple pie in the sky hopes.