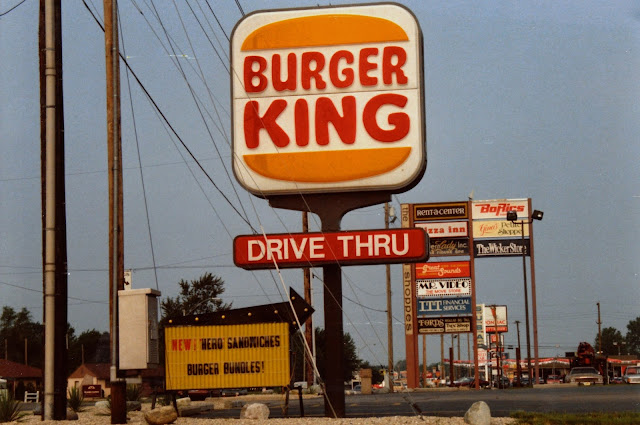 Burger King
Muncie, IN (1987)
This photo was taken on East McGalliard Road in Muncie, Indiana.  It was shared on Flickr by Dr. Bob Hall.  You can see the entrance to The Mall Shoppes in the background, including a pizza restaurant and a video rental shop.  I did a little research on the area and found that the Burger King is still in the same location. 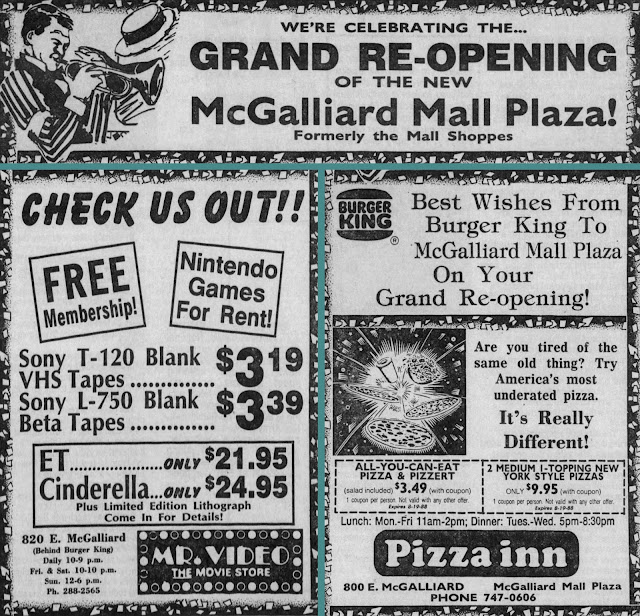 Dr. Hall has the photo labeled as August, 1988, but I believe that it was taken in the summer of 1987.  The newspapers in Muncie at the time in question include reports of a massive fire at the McGalliard Mall Shoppes in October, 1987.  This fire displaced nearly 20 businesses, including the ones from the advertisement above, which were published on August 5th, 1988.  When the Shoppes reopened, the shopping center was renamed from The Mall Shoppes to the McGalliard Mall Plaza. 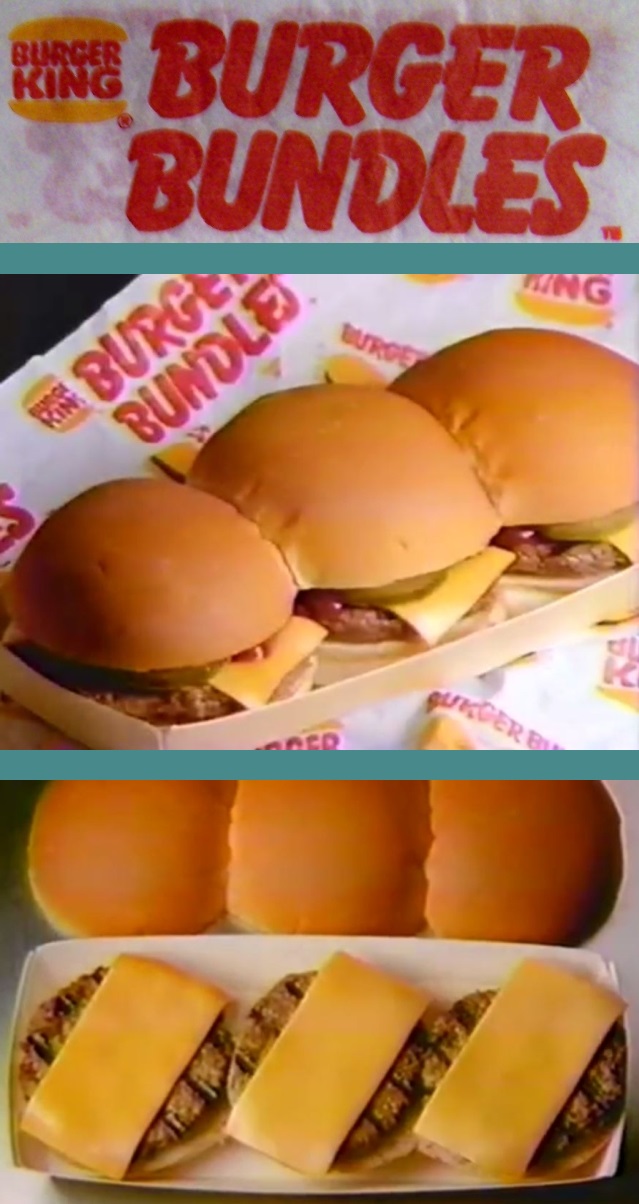 The other clue that led me to date this photo to 1987 is the availability of Burger Bundles.  These were a limited edition mini cheeseburger similar to the ones sold by White Castle, and I loved them when I was a kid.

Burger King introduced these in 1987.  They sold well, but they were discontinued before the end of the year because they were difficult to prepare.  Burger King cooks their burgers on a grill conveyor belt.  The frozen patties are placed at the start of the belt which takes them through a broiler that is encased in a steel box.  The fully cooked burgers come out of the other side and fall into a drip tray that catches the excess grease.  It's actually a pretty ingenious way for a fast food restaurant to prepare a lot of product with a limited staff in a short period of time.  The problem with the Burger Bundles is that the meat patties were so small that they often fell through the conveyor belt and into the broiler.  The kitchen crew might put 10 Burger Bundle patties on the belt and get maybe 6 or 7 out of the other side while the other three burned away at the bottom of the grill.  Not only would this waste food, but it also required the grill to be dismantled and cleaned, which slowed down the production of most of their items. Burger King has brought their mini burgers back a few times under different names over the years.  The one I remember best were sold for a few years starting in 1990 and were called Burger Buddies.  As you can see in the photo above, the mini burger patties were connected together in something like a figure 8.  The buns were connected in a similar manner, and the idea was that you would snap the Burger Buddies apart and eat them one at a time.  I imagine this was done to address the problem of the mini patties falling through the conveyor belt.  I'm not sure how well it worked because they were taken off of the menu before I started working for Burger King in the fall of 1995, but they were a lot of fun to eat when I was 9 and 10 years old.

They came back and were discontinued again at some point in the 2000's.  This time, they were called BK Burger Shots and were part of the Value Menu.  I don't remember having them in my adult life.  Hopefully they'll come back again sometime soon.