What We Did When Our Parents Went Shopping 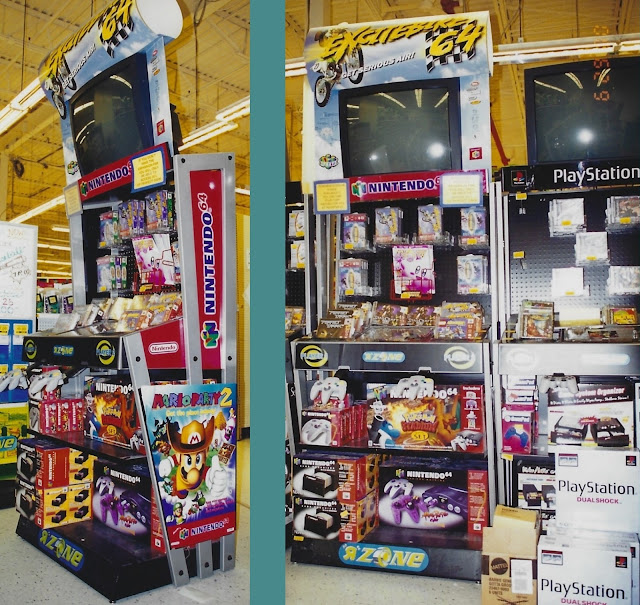 Excitebike 64 demo stations
Toys R Us - June 29, 2000
These photos are from the @pori64 collection that I first wrote about last week.  Back in the days before LCD monitors, stores like this Toys R Us in Paramus, NJ would mount a CRT television on a shelf and hook it up to a game console that is either on display in a clear, locked box or hidden in a locked cabinet behind the merchandise.  Controllers were then connected to the system and mounted onto the front of the shelves, usually with a flexible metal enclosure to protect the cord.  This would allow shoppers to either a limited demo or the full version of the new games that were available for sale.  Like the example above, the televisions used on these demo stations were often surrounded by a thick cardboard border which made the display feel a bit more like an arcade cabinet.

Unfortunately, these displays didn't always stay in good shape for very long.  The ones at video game stores and toy stores were usually kept up pretty well, but the demo stations in department stores like Wal-Mart often had controllers that were damaged or completely broken.  When they were in working order, they were a great way for a kid to spend their time in the 80's and 90's while their parents shopped throughout the rest of the store.  I'm sure it annoyed the employees who worked in the electronics department, but hey, it was free entertainment.

To this day, I've never played Excitebike 64, but I grew up playing the original Excitebike on the NES when I was a kid in the 80's.  You can see two different N64 console bundles on the bottom shelves: the limited edition Atomic Purple edition, and the set that came packaged with Pokemon Stadium and the Transfer Pak which allowed gamers to use Pokemon from their Game Boy games in Pokemon Stadium.  Other N64 games that you can see on display include Tony Hawk Pro Skater, Lego Racers, StarCraft 64 and Perfect Dark.  The yellow square signs below the television are there to inform shoppers that you need to have the N64 Expansion Pak to play Perfect Dark.  There is a Nintendo Power magazine rack in the center of this display where you can see volume #134 which has Kirby 64: The Crystal Shards on the cover.  The side of the display has a poster for Mario Party 2, but it looks like that was eventually covered up by the Playstation demo station when it was pushed beside it.  The Playstation games aren't as easy to see, but the one on the top right hand corner is ECW Hardcore Revolution.  The rest of the games on peg hooks had too much camera glare for me to identify, but if you look closely at the shelf above the demo station controller, you can see Pong: The Next Level and The Legend of Dragoon.  If you're as completely ridiculous as I am, you'll see a Playstation's Greatest Hits copy of Gran Turismo 2 hiding in the back.