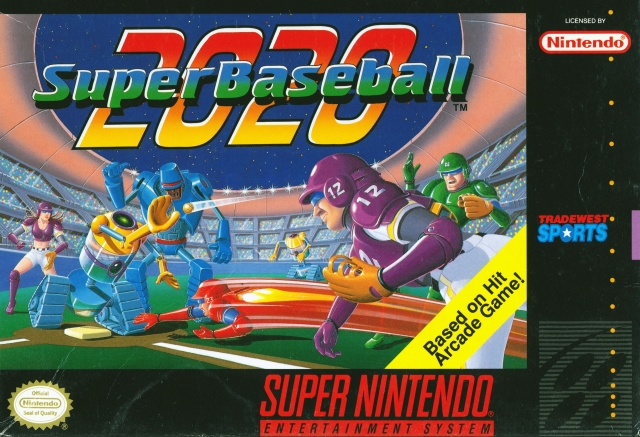 Super Baseball 2020
SNK (1991) / Tradewest (1993)
This futuristic baseball game first appeared in arcades in 1991 and was ported to the Genesis and Super Nintendo two years later.  It features baseball games played by robots and cybernetic-enhanced men and women inside of an egg-shaped ballpark with special rules, including land mines in the arcade version. 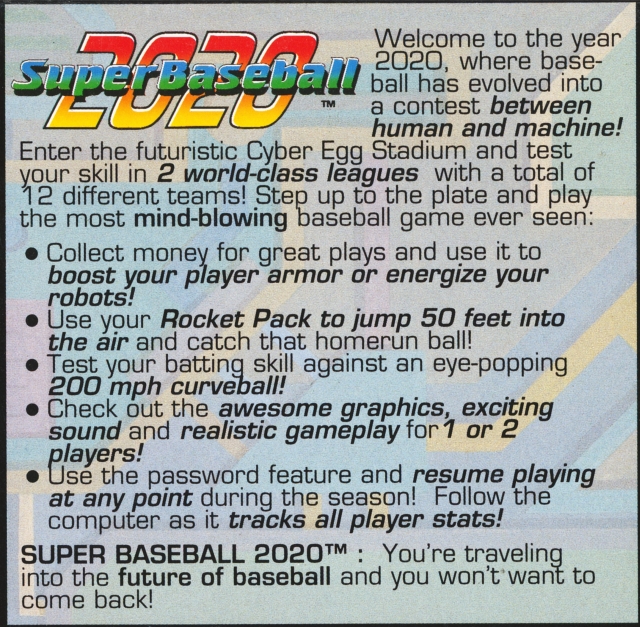 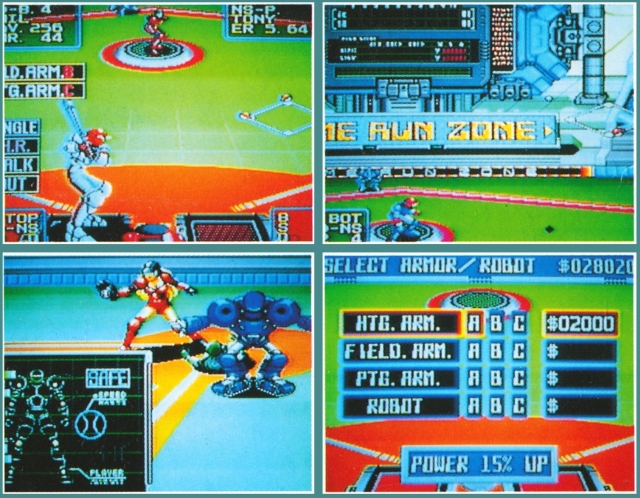 Here we are in 2020 and there are no robots or robotic-enhanced humans in baseball.  Sadly, there aren't any humans in baseball at all.  The developers of Super Baseball 2020 had quite a good imagination about the future of baseball, but they couldn't picture a world in which a new virus from China caused more Americans to lose their lives in less than three months than the Vietnam War did in over a decade.  I suppose it's good that they didn't.  A baseball video game filled with empty stadiums and a guy in a Phillies shirt and a surgical mask trying to find toilet paper probably wouldn't have thrilled too many gamers in the early 90's.

If Bob Nightengale is correct, we might see a return of Major League Baseball in the near future.  According to his sources, the league is planning to start the 2020 season in late June or early July.  Unfortunately, the games would have to be played in empty stadiums, but unlike the Cactus / Grapefruit Plan or any of the other rumored plans that have been leaked to the media, this plan would not separate players from their family in a quarantined baseball bio-dome.  However, it would radically realign the divisions in an effort to limit travel.  For all intents and purposes, the American League and National League would not exist.  Instead, there would be three divisions which break down like this:

The executives that Mr. Nightengale cited in his article are confident that this plan will not only work, but that Major League Baseball will be able to get in a season of over 100 regular season games, but it does leave us with a lot of unanswered questions.  For example, will every team in the league adopt the DH rule, or will games played in National League ballparks still require the pitcher to bat?  Will the teams return to their AL / NL breakdowns in the playoffs to battle for the pennant before facing off in the World Series, or could we potentially see a World Series between two AL teams or two NL teams?  If the three-division realignment continues into the post-season, how many Wild Card spots would be up for grabs and how would the playoffs be structured?  How many players would be on each roster?  Would minor league games be played, and if not, how would teams replace players who get hurt, or even players who get infected by Covid-19?  Speaking of the pandemic, will they have to shut down the entire league if a player tests positive for the virus?  How about if a groundskeeper tests positive, or a camera operator, or a player's immediate family?  And where are they getting all of these tests from when there doesn't seem to be enough tests for the general public, and the ones we do have are highly questionable for their high number of false-positive and false-negative results?

Right now, there are far more questions than answers, but setting aside the pandemic, I would be in favor of making this division realignment a permanent change in Major League Baseball.  With inter-league play, talk of a universal DH, and teams like the Brewers and Astros changing leagues when it suits them, the American League and National League breakdown is all but obsolete.  The realignment would definitely make it more difficult for the Phillies to win their division, but I think it would be a more interesting regular season.  It would put all of the Phillies World Series opponents except for the Royals in their division: Red Sox (1915), Yankees (1950, 2009), Orioles (1983), Blue Jays (1993) and Rays (2008), while allowing the Phillies to maintain their rivalry with the Mets and Nationals, and potentially renewing a rivalry with the Pirates that ended after the last divisional realignment in 1994.

Or they could go with cyborg baseball.  That works too.