It Made The Grocery Store Run In Less Than 12 Parsecs 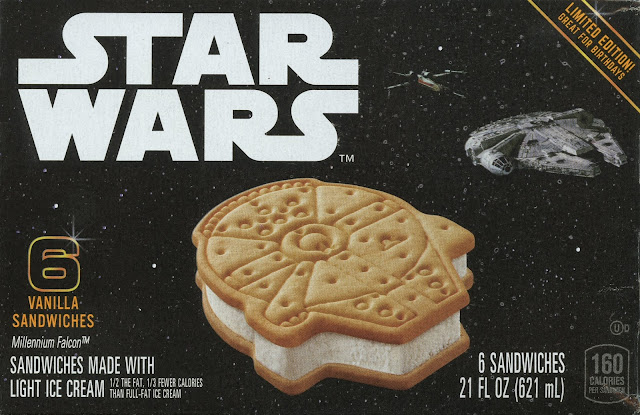 Star Wars Vanilla Ice Cream Sandwiches
Nestle (2020)
It's May 4th, which means my half-witted, scruffy-looking nerf herder self is going to spend a large chunk of the day watching Star Wars: original trilogy, original cut.  No added scenes, no replacement of iconic music with forgettable stock score, and no goofy CGI shoehorned in.  However, most Star Wars nerds will tell you that May 4th is about more than just the movies.  There are toys video games, comics and all sorts of other things that a man approaching 40 should have long since grown out of.  It's also important to have lots of Star Wars themed snacks close at hand.  That's where these Millennium Falcon Ice Cream Sandwiches from Nestle come in.

Before I review these, I should probably offer a bit of disclosure.  I worked with Nestle USA Consumer Services in various roles over the previous decade - specifically in the confections, baking, ice cream and beverage divisions.  In my time, I've visited the manufacturing plant in Laurel, Maryland to see first hand how the products are made, and I've eaten a ton of Nestle ice cream. 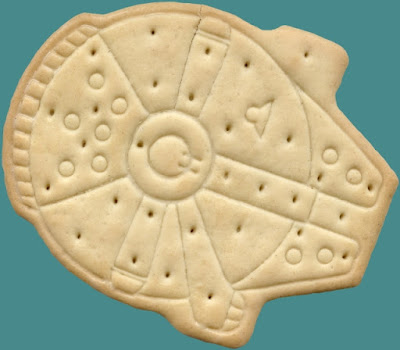 Having said all of that, I'm pretty confident in my opinion that the Star Wars Millennium Falcon ice cream sandwiches are virtually identical to the Nestle line of Skinny Cow ice cream sandwiches.  The cookie has the same exact taste and texture of the vanilla cookie that was used for the discontinued Skinny Cow Strawberry Shortcake sandwiches, and the ice cream has the familiar Nestle Vanilla light ice cream flavor that I've had so many times before in the Skinny Cow and Dreyer's / Edy's Slow Churned product lines.

Low fat vanilla ice cream between a vanilla cookie is the very definition of bland, but these taste alright.  I think they were a bit overpriced, but if you want to enjoy an ice cream snack while you binge watch the Star Wars franchise, you could do worse than these little Millennium Falcon sandwiches.  May the 4th be with you!