CM Punk Finally Got His Wish 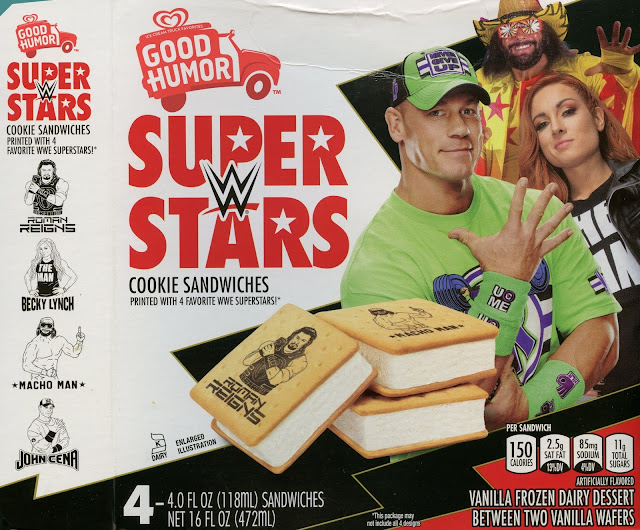 WWE Superstars Cookie Sandwiches
Good Humor (2020)
Wrestling fans who grew up in the 80's and 90's have long waited for the old WWF Ice Cream Bars to make a comeback.  They're so fondly remembered that they were written into the 2011 CM Punk storyline in which he made a list of demands from company chairman Vince McMahon.  It was subsequently turned into a t-shirt, but the ice cream bars themselves never came back

These new cookie sandwiches aren't the same thing, and not just because they don't have a stick).  The old bars had a crisp cookie that reminded me of a thin Nilla Wafer.  These are much softer with a texture similar to the Millennium Falcon ice cream sandwiches that I wrote about yesterday.  These cookies are much more flavorful than the Star Wars ones.  I believe this is because of the artificial flavors.  Back when I was working for Nestle, the company underwent a change to remove all of the artificial colors and flavors from their confections and ice cream products.  In my opinion, this resulted in a bland, less flavorful product with no added health benefits (in fact, there are many natural flavors which are less healthful than artificial ingredients).  At any rate, these cookies taste significantly better than the Millennium Falcon ones.

The ice cream is also different from the Star Wars sandwiches.  Whereas the Millennium Falcon ones have a low-fat vanilla ice cream, the WWE Superstars Cookie Sandwiches are made with "frozen dairy dessert".  This has to do with the FDA guidelines that regulate what can legally be labeled as ice cream, such as the percentage of milk fat, milk solids and air whipped into the product to make it creamy.  I've never been a big fan of light ice cream.  I find it to have a chemical aftertaste, even when it's made with all natural ingredients.  The frozen dairy dessert in the WWE sandwiches had the same taste and texture of the vanilla ice cream that I grew up eating, so I prefer these. 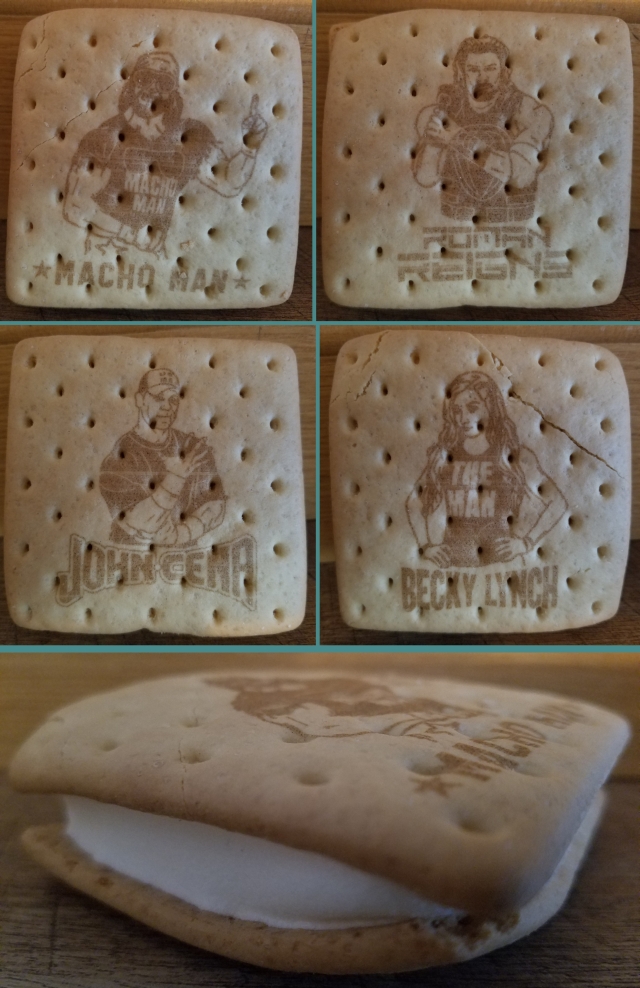 The wrestlers that were chosen for these sandwiches are an interesting mix.  Roman Reigns and Becky Lynch represent the modern era of WWE Wrestling.  John Cena is all but retired from professional wrestling, but he still makes appearances from time to time, and with the exception of The Undertaker, he's probably still their most marketable star.  The last one is the one that has me puzzled.

"Macho Man" Randy Savage is by far my favorite wrestler out of this group, and he's one of my favorite wrestlers of all time.  He's also the only one out of this group who also appeared on the old WWF Ice Cream Bars back in the day.  However, the wrestling fan community has long debated why WWE waited until after the death of Randy Savage to acknowledge his existence.  Performers who have sued him, testified against him in federal court, and have even physically assaulted him have been brought back to work in the WWE, but numerous former employees have stated that Vince McMahon wouldn't even allow the name of Randy Savage to be mentioned in creative meetings.  It was only after Randy's death in 2011 that the company inducted him into their Hall of Fame and began to release t-shirts, toys, home video and other merchandise featuring their former champion.  Yet, when the time came to choose a wrestler for this product to represent fans who watched the product in the 80's and 90's with a WWF Ice Cream Bar in their hands, they chose Randy.  Interesting. 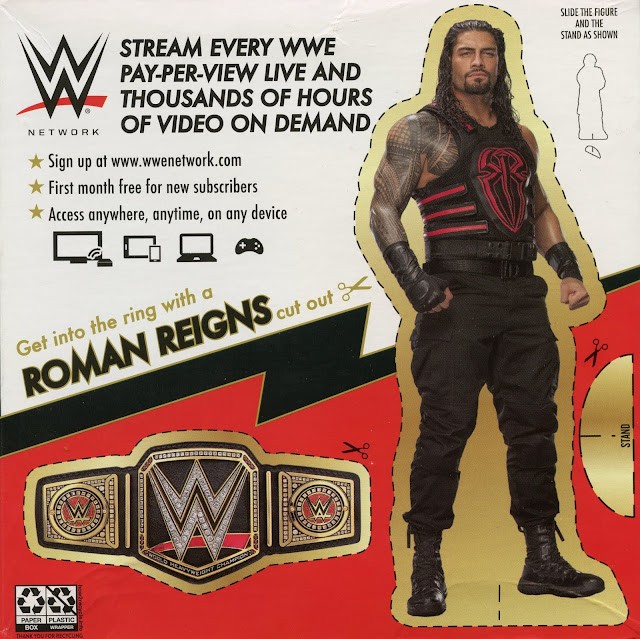 The back of the package features a cardboard cutout of Roman Reigns with a stand and a WWE Championship Belt.  This takes the place of the old WWF Trading Cards that we used to cut off of the ice cream bar packages when we were kids.  It's a pretty neat idea.  I guess kids aren't into trading cards as much as they used to be, but it's nice to see that they're still including something fun for the next generation of fans.