The Ol' Left-Hander, Rounding Third And Heading For Home 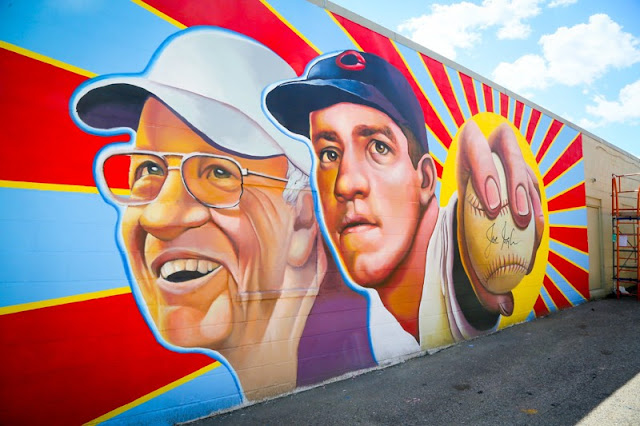 Joe Nuxhall mural
Clark's Sporting Goods - Hamilton, OH
On this day in 1944, Joe Nuxhall made his major league debut.  Pitching out of the Cincinnati Reds bullpen, he was brought into the 9th inning of a game to face the first place St. Louis Cardinals.  He gave up five runs on two hits, five walks and one wild pitch.  Following the game, he was sent down to the minor leagues where he spent the rest of the season.  For anybody else, this would have been a disastrous debut in the the big leagues, but not for Joe.  He was only 15 years old.  The ninth grader was added to the Reds roster after a number of the team's players were drafted to fight in World War II.

Joe's career was not a blip on the radar.  He made his way back to the Reds at the ripe old age of 23 and pitched in the Major Leagues for the next 15 years.  He was a two time All-Star in 1955 and 1956, and was elected to the Cincinnati Reds Hall Of Fame in 1968.  Following his retirement as an active player, he joined the Reds radio booth and worked as a broadcaster for Reds games from 1967 until his death in 2007 at the age of 79.

Three years ago, this mural was painted on the side of Clark's Sporting Goods in Joe's hometown of Hamilton, Ohio.  It was designed by Hamilton High School art teacher Paul Loehle.  It shows a young Joe Nuxhall holding a baseball with his whole life ahead of him alongside the man he would become as the beloved voice of the Reds on the radio for 40 years.