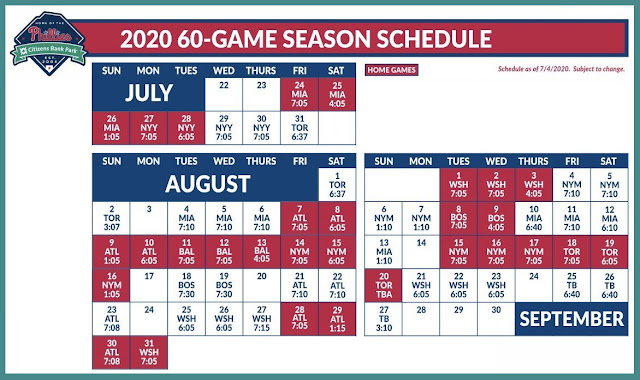 The Phillies have announced their 60 game schedule for the 2020 season.  Opening Day is scheduled for Friday, July 24th when the Phillies will play the Marlins in Philadelphia.  If all goes according to plan, the season will end with a six game road trip against the Nationals and Rays.

The entire season will be played against the NL East and AL East.  Here is the breakdown of each series as reported by the MLB Network. 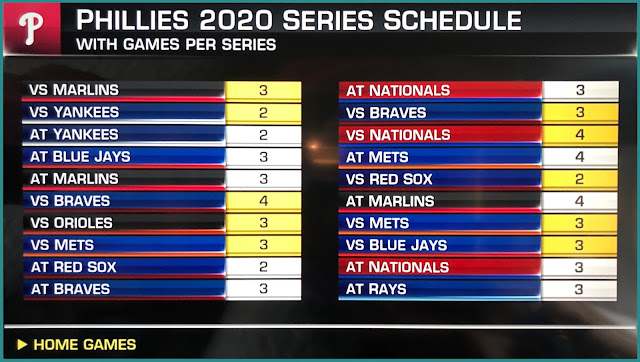 The playoff structure will remain the same as it was last year - three divisional winners and two wild card teams per league, with the wild card teams facing off in a do-or-die game before the start of the League Championship Series.

With the shortened season, the fact that some players have chosen to sit out, and the looming threat of Covid-19 that can take multiple players out of action for several weeks at a moment's notice, there really is no way to predict a winner.  Frankly, there's significant doubt that Major League Baseball will be able to complete this 60 game season without the pandemic causing a shutdown.

I don't really care if the Phillies win or lose in 2020.  I just want to see the players, the staff, and their families get through this season without negatively impacting their health, their careers or their lives.  The fact that they're starting a season when the country has a more widespread saturation of the virus than we did when the season was postponed during Spring Training is concerning.  It leads me to believe that Major League Baseball isn't taking this crisis nearly as seriously as they should be.  I hope that it doesn't take a fatality to make them see that this isn't a good idea, but I suspect that's exactly what will happen.  I hope that I'm wrong.