Today was supposed to be the 43rd game at Citizens Bank Park and the 86th Phillies game of the season.  Instead, the entire baseball calendar has been 86'ed due to the pandemic, and July 1st is the first day of Summer Camp for the 2020 season. 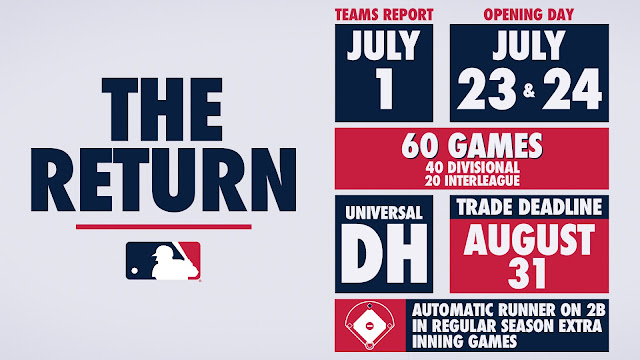 I'm not going to pretend that I think this is a good idea.  Although this country seems to have gotten bored with the idea of public safety, the virus hasn't gone away.  In fact, the state of the virus in the nation today makes the months of March and April look like a walk in the park.

It seems like Major League Baseball is going to move forward with this plan until we see fatalities among the players, team staff or their families, so all that's left to do is argue about the rule changes.  I'll keep my thoughts on this as brief as I can.  I support the Universal DH, but I find the Extra Innings Automatic Baserunner rule to be only slightly less asinine than the people who argue against wearing face masks in public.  Starting the 10th inning with a runner on second base is a mockery of the game.  If the league is truly hell bent on eliminating games that go deep into extra innings, they should instead adopt the rules of Japanese baseball which allows for a maximum of three extra innings before a game ends in a tie.

Setting aside the question of whether it's wise to risk people's health for a soulless game in an empty ballpark, or whether the rule changes help or hinder the game, my question is whether or not anybody will care about the 2020 season.  Assuming it goes on as planned and we have playoffs and a World Series, how many fans would consider this a valid championship or care if their team wins?

Imagine that you're a fan of the Rangers, Brewers, Padres, Rockies or Rays.  Do you want your team's very first World Series Championship to take place in a 60 game shortened season with no fans in attendance?  What about Dodgers fans, who have gotten close in recent years, but haven't been able to win it all.  How about Indians fans, who haven't had a World Championship in over 70 years?  Would a 2020 World Series Championship be celebrated, or would you prefer that your team not be involved?

If I were given the choice between my Phillies winning the 2020 World Series or finishing in dead last place to get the first overall pick in the 2021 draft, I don't know which I would pick.  I'd like to say that I'd choose the title, but if I'm being completely honest with myself, I don't know that I would.  I think a lot of other fans wouldn't have a quick answer to that question either.  If so many of us have already written off the 2020 Championship as an asterisk tainted victory at best and a meaningless title at worst, why put player's health and careers at risk in the pursuit of it?