Take Me Home To The Ballgame 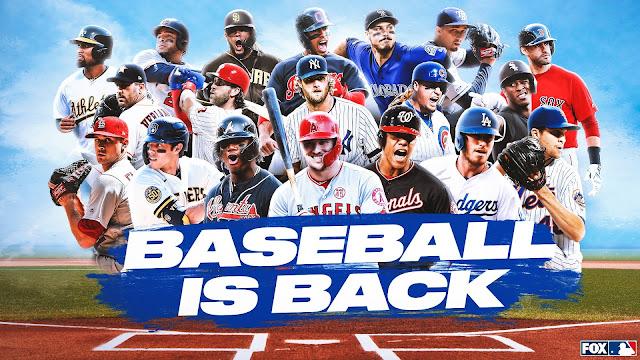 MLB and the MLB Players Association have announced the plan to start the 2020 baseball season.  The players are scheduled to report to their home ballpark on July 1st for spring summer training.  They are planning for a 60 game regular season that will begin on July 23rd or 24th and end on September 27th.

Quite frankly, I think this is a mistake.  I love baseball more than just about anything this world has ever invented, but I find the idea that the game can continue during a global pandemic in the country that has become the epicenter of Covid-19 is wishful thinking at best.  The pattern I've seen in social behavior regarding the pandemic is that people and organizations in this country fail to take the virus as seriously as they should until it affects them directly.  That is to say, until a person is forced to fight for their life, or until they see a member of their immediate family taken by the virus, the average American tends to brush the idea off as just another risk they take in their lives, no different than the risk of a car accident when they drive to work.  They are mistaken, and it's a mistake that will cost many more lives before the first history book is written on our response to Covid-19.  Unfortunately, I believe that our impatience and arrogance as a country is going to extend the threat within our borders for many months after the rest of the world is able to return to their pre-pandemic way of life.  The European Union is already working towards a plan to ban travelers from the United States until further notice as a result of our reckless handling of the pandemic, and I don't blame them.  If I were them, I would ban us too.

Alright, I've said what I wanted to say about the virus and I won't harp on it any further - at least not today.

One positive that has come out of the negotiations between the players and the owners is that they will stick to the March agreement regarding player salary.  In other words, the team owners will have to pay the players 100% of their pro-rated salary instead of expecting them to risk their health and their careers for a fraction of their contract.  There will also be a number of changes to the structure of the game, including the following:

I love the idea of a Universal DH.  I am a traditionalist when it comes to most aspects of the game, but I've always disliked the idea of the American League and National League playing under two different sets of rules.  AL teams have had a distinct advantage in interleague play and the post-season since the implementation of the designated hitter as aging hitters who can still produce at the plate are all but pushed out of the National League.  However, I think the idea of starting the 10th inning with a runner on second is asinine.  If they're determined to put an end to extra inning games that go on for hours, I'd rather see Major League Baseball follow the NPB model of allowing the game to continue until the end of the 12th inning.  If a game in Japan is still tied after the 12th, the game is over and it goes into the record books as a tie.  It works in the NHL, and it would work just fine in MLB.

Here are the dates and deadlines for the 2020 season as they stand today:

There are other details, but this is the meat and potatoes of the plan for the 2020 season as it is right now.  I expect that this will be modified throughout the year.  If I'm being totally honest, I have every expectation that the current surge in Covid-19 cases and a second wave of the virus will put a stop to the season before the playoffs are scheduled to begin.  Like everything else this year, time will tell.