Baseball In The Lottery 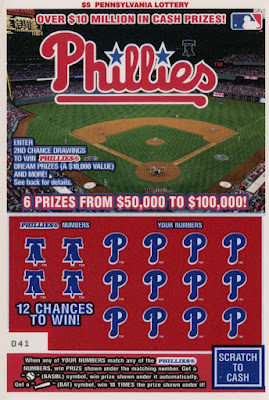 Philadelphia Phillies Lottery Tickets
Pennsylvania Lottery (2008, 2011)
Once in a while, the Pennsylvania Lottery comes out with a baseball themed ticket.  The one on the left was sold in 2008 and the one on the right came out in 2011.  I'm not sure if they've had them more recently than that.  I don't really buy lottery tickets for myself, but before my grandparents passed away, they used to give them as presents in my birthday and/or Christmas cards.  If a Phillies one was available, that's the one they got for me.

The scratch-off tickets that were sold in the 80's and 90's were usually more generic.  I don't ever remember seeing a Phillies ticket from when I was a kid, but they occasionally baseball themed games like the three tickets below.  These came in a pack that I bought on eBay earlier this month.