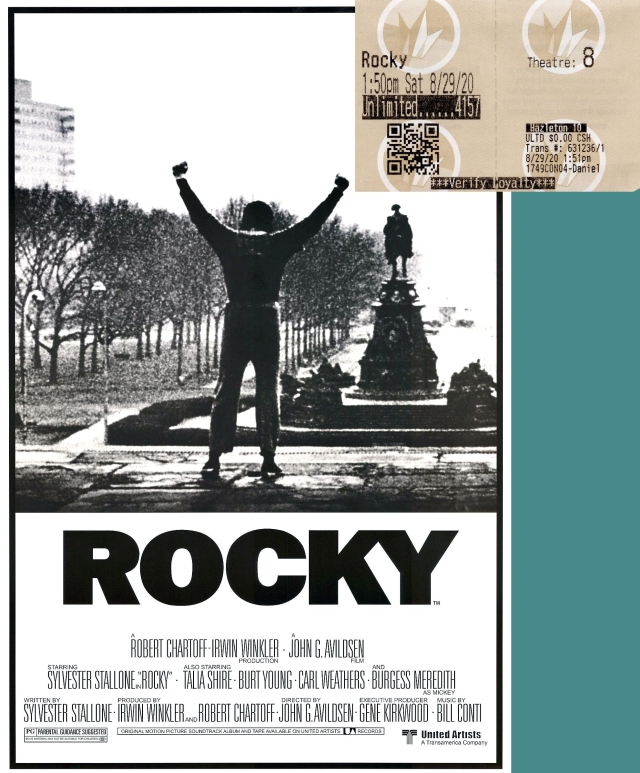 Rocky
United Artists (1976)
The movie theater in Hazleton reopened this weekend with new pandemic procedures to keep the employees and guests safe.  Truth be told, if you avoid new releases on their opening weekend, it's probably one of the easiest places to maintain social distance outside of your own home.  I suppose that's one of the advantages of living in a small town.  There aren't many, so I'll take what I can get.

Another circumstance that has few advantages is living through a global pandemic.  For example, I like the idea of having six feet of personal space, but it's mitigated by the claustrophobic feeling that I have while wearing a face mask.  One of the unexpected perks of the pandemic is the fact that theaters are re-opening for business before they have a sufficient number of new movies to fill the screens, so the movie studios are re-releasing classic films for a limited time.  One of those is my favorite movie of all time: Rocky. 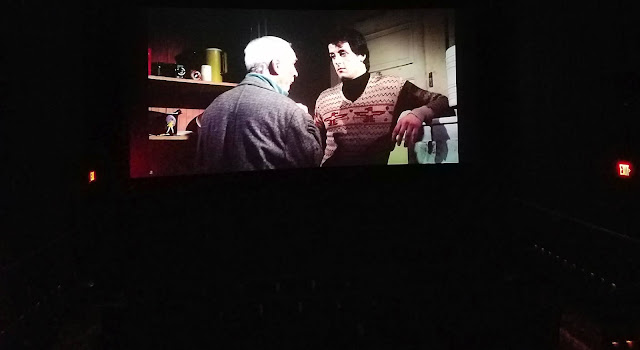 Rocky doesn't seem to receive the same level of appreciation in 2020 that it did after its release in 1976 when it won the Oscar for Best Picture and Best Director (and should have won for best original screenplay).  I think that some of this is because of the many sequels that followed, which continue to this day in the Creed franchise.  They're all good films (except for Rocky V, which is pretty terrible), but I can understand how the genius of the original can be overlooked at a time when it's just part of a franchise.  However, if I had to blame one thing for tainting the legacy of this iconic film, I would blame something that I've grown to despise as I've gotten older: parody and references.

For every Mel Brooks or Weird Al who use parody to express their creative and comic genius, there are about a thousand talentless hacks who throw together a bullshit copy of an original work, with lame jokes that aren't funny in the slightest, to line their pockets with the cash of a gullible audience.  This has only gotten worse over the past 20 years with Family Guy inspiring a generation of hacks who have never had a truly creative thought in their lives to distribute trash that merely references something in pop culture.  The audience laughs along as if a joke has been told, but in reality, they're just experiencing a moment of recognition from something in their memories - Idiocracy in action.

Meanwhile, the actual creative work is now forever associated with the garbage that has parodied or referenced it.  The result is that someone watching Rocky for the first time in 2020 now has to disassociate from all of the times they heard some ass clown mock Stallone by saying "Yo Adrian" to be able to fully appreciate the story of a guy who wants nothing more than to avoid being just another bum from the neighborhood and to connect with the woman at the pet store where he gets his turtle food.

I didn't intend for this to be a rant.  I'm tempted to delete the three paragraphs above, but I'll leave it there in the off chance that someone might stumble on it and feel the same way.  At any rate, I never thought I would get to see Rocky on the big screen, and I'm very thankful that I have.