Listen To The Sound Of A Whole Other O 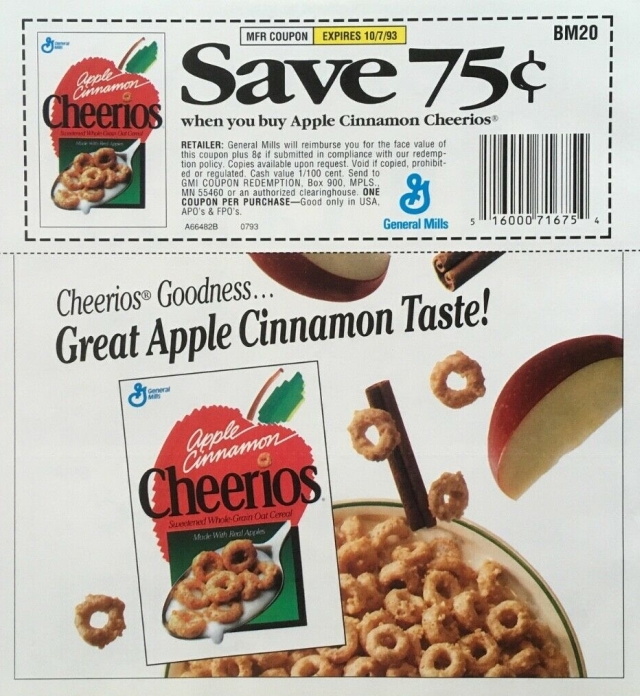 Apple Cinnamon Cheerios
General Mills (1989)
These days, they make a bunch of different versions of Cheerios, we only had two when I was growing up in the 80's - regular and Honey Nut.  Then, as the 80's drew to a close, these came on like gangbusters and totally blew my mind.  Apple Cinnamon Cheerios?  Holy crap, the 90's are going to be awesome!

They advertised the hell out of these when they first came out.  You couldn't turn on a tv in the United States for a good span of five years without hearing someone sing  "Listen to the sound of a whole other o".  Now that I look back on it, it seems a little kinky.  A whole other o, huh?  So, what are we talking about here, and how does it involve my breakfast?

All jokes aside, what was that slogan supposed to mean?  These aren't Rice Krispies that go snap, crackle and pop.  Cheerios don't make a sound.  You just pour 'em in a bowl, add milk, and eat 'em up.  Did I miss out?  Was I supposed to hear something?  The only sound I heard was my own groans of disappointment if I opened up the cupboard at home and saw the old yellow box of regular Cheerios.  I knew that there were starving people all over the world and I appreciated the fact that I had breakfast to eat, but at the same time: what kind of sadist do you have to be to have a choice between Honey Nut, Apple Cinnamon and plain and go for the plain?