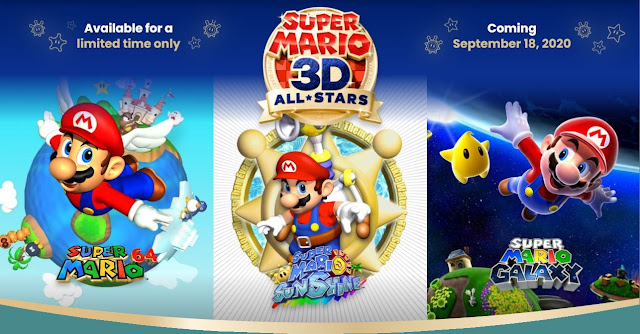 I remember getting the first Super Mario All-Stars in the mid-90's when I was a teenager.  It was a Super Nintendo cartridge that included a graphically enhanced version of Super Mario Bros 1, 2 and 3 from the NES, as well as a game called "Super Mario Bros: The Lost Levels", which was a repackaged version of the Japanese Super Mario Bros 2 that was released only on Famicom.  If I'm remembering right, I think I traded a different game with a friend to get this cartridge, and I still have it today.  I played the hell out of that thing over the years.

The original Super Mario All-Stars was re-released on the Nintendo Wii ten years ago to commemorate the 25th anniversary of the series.  Like the new 3D All-Stars, this compilation was advertised as a limited edition game, but within a year of it's release, the company mass produced the hell out of it as a part of their Nintendo Selects line.  Unlike the original SNES cartridge, the Wii re-release was little more than a disappointing rom dump that added no additional features - not even the option to play the original NES versions of each game, or Super Mario World, which was included in later cartridge releases, which were called Super Mario All-Stars + World.

Despite the shady marketing behind the 2010 release, I pre-ordered a physical copy of the new Super Mario 3D All-Stars.  Super Mario 64 was one of my favorite games when I was a teenager, and it still holds up today.  I haven't played as much Sunshine or Galaxy, but I enjoyed them too, and I'm looking forward to being able to play them all on the Switch without having to hook up three different consoles.