The Dangers Of Zipping Up Your Pants 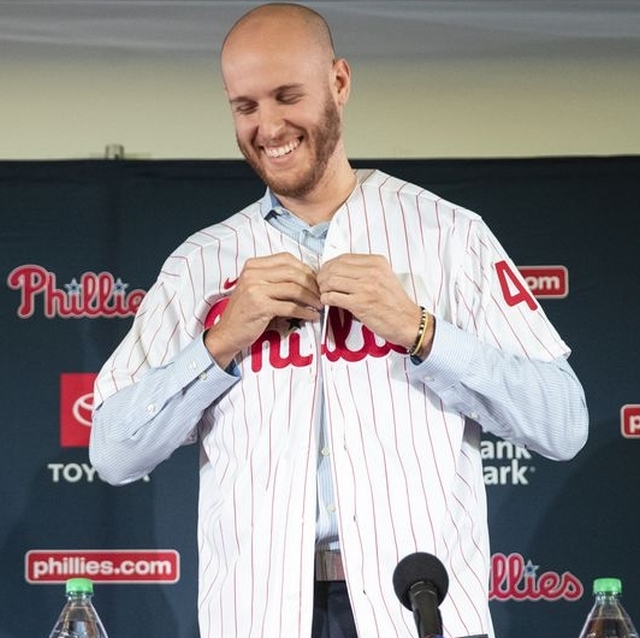 This is starting pitcher Zack Wheeler.  He was our big free agent acquisition over the winter, and he's had a fantastic first year in Philadelphia so far, with a record of 4-0 and an ERA under 3.  This photo shows Mr. Wheeler putting on his jersey for the first time at the press conference when it was announced that he was joining the Phillies.  Luckily for us, they didn't give him a pair of pants to try on or his season might have ended before it even began.

One week ago, it was announced that Wheeler would be missing his weekend start against the Miami Marlins because he injured his middle finger while he was putting on a pair of pants.  It's been that kind of season. 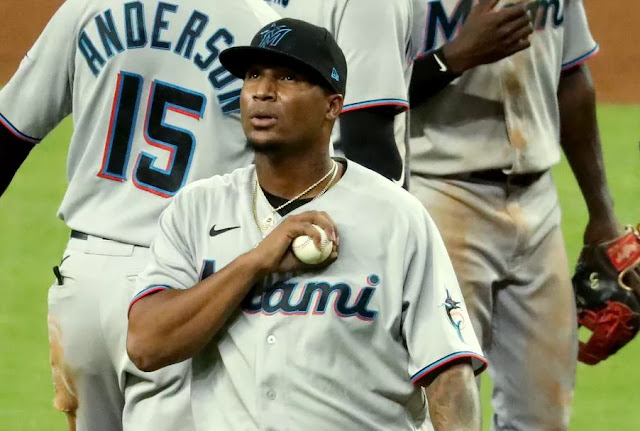 When I last wrote about the Phillies two weeks ago, the Phillies had won 9 of their last 10 games and were threatening to overtake the Braves for first place in the division.  Since that time, the Phillies lost 5 of 7 against the Marlins and have fallen to third place in the division.  To add insult to injury, rookie phenom Sixto Sanchez has been the talk of the game and has drawn comparisons to the great Pedro Martinez, including from Pedro himself.  The Phillies traded Sixto to the Marlins for J.T. Realmuto less than two years ago, and despite the fact that Realmuto is objectively the best catcher in baseball, this trade is already beginning to look like it might be one of the worst trades in franchise history.

Meanwhile, the pitching prospect that we kept has been quite disappointing, especially in comparison to Sixto.  Spencer Howard is 1-2 with a 5.92 ERA in six starts this season.  His velocity is down, and he has problems with his shoulder that have likely brought an end to his rookie season.  This is especially bad news when you consider the fact that he lost two months of the 2019 season to a shoulder injury as well.  It's beginning to look like Howard's career might look a lot more like Kyle Drabek than Aaron Nola.

Jake Arrieta has joined Spencer Howard on the IL, and is likely out for the rest of the year.  J.T. Realmuto hasn't been officially put on the IL, but he's having problems with his hip and has been benched for over a week.  Rhys Hoskins has a left UCL injury that may require Tommy John surgery over the winter.  Bryce Harper's production at the plate has completely fallen off of a cliff, and the bullpen continues to give up runs away like candy on Halloween.  In fact, our new relief pitchers have been performing even worse than the guys they were brought in to replace.  The Phillies have six losses this season in games that they were leading by 3 or more runs.  In short, things are not looking good.

The Phillies have brought in a couple of new faces for their depleted roster, signing catcher Jonathan Lucroy and Greg Bird.  With all due respect, these guys aren't going to make a big difference.  Lucroy was a two-time all star, and Bird had an impressive rookie year back in 2015, but their best days are long behind them.  Lucroy has had two defensive innings and zero plate appearances for the Red Sox in 2020, and Bird hasn't played in a major league game since April 13th of last year. 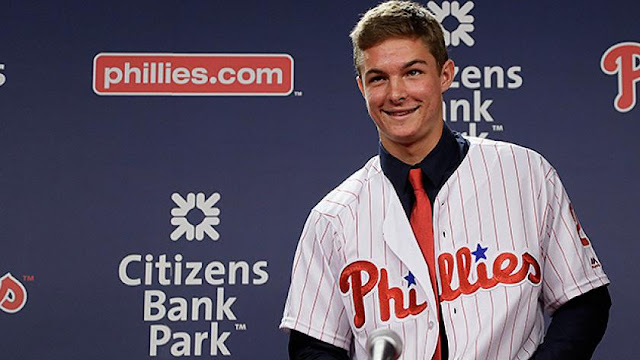 In slightly more exciting news, the Phillies have promoted 22 year old center fielder Mickey Moniak to the big leagues.  Moniak was the first overall pick in the 2016 Draft, and while his minor league career hasn't been terrible, it also hasn't been all that impressive, especially for the #1 pick in the draft.  I don't think he's a bust (at least not yet), but I also don't think he's ready for the majors.  However, with all of the injuries, the Phillies need able bodied players to get through the rest of the season.  That's the point we're at in 2020.

One of the few bright spots for the Phillies over the past couple of weeks has been rookie reliever Jojo Romero, whose performance at the big league level this season is eclipsed only by his entrance from the bullpen.  Here he is slamming a Red Bull and obliterating the can as he comes into the game.  This dude has Phillies Legend written all over him.  We can only hope that he can continue to put on his pants without hurting himself.

The other bright spot has been Alec Bohm, who has been everything we could have hoped for.  He's batting over .300 and finds ways to get on base and make things happen every day, and he's improved defensively at third base.  Recently, he's been seeing time at first base with Hoskins on the IL, but whatever side of the diamond he's on, he looks to be an impact player for years to come with the Phils.

Despite recent success of Bohm and Romero, I'm beginning to question if the Phillies rushed their rebuild and closed the window of contention before it ever really opened.  As happy as I've been with J.T. Realmuto, it's become clear that the Phillies lost that trade.  Two years of the best catcher in baseball is not worth seven years of a starting pitcher with a 100 MPH fastball and ace potential at the major league level.

While I think the Phillies have mostly done well with free agent signings over the past few years (Harper, Wheeler, Gregorius and McCutchen), I believe they'd be in a better position to win, both in 2020 and in the future, if they hadn't made any of the trades that Matt Klentak made over the past few years.  While it's undeniable that Realmuto is a better catcher than Jorge Alfaro, the Phillies could have just signed Realmuto in free agency this winter.  As it stands, they're going to have to pay top dollar to keep him anyway.  Imagine if they could have brought him into a 2021 team with Aaron Nola, Sixto Sanchez and Zack Wheeler at the top of the rotation.  This would have allowed them to take their time with Spencer Howard and not rush him into a Major League rotation after only 30 innings pitched above Single-A ball.  Additionally, had they not given away Howie Kendrick to the Nationals for nothing, and had they not traded for Jean Segura, the Phillies would have an infield of Hoskins, Kendrick, Gregorious and Bohm, with Scott Kingery as the super utility and J.P. Crawford as a defensive replacement/pinch runner off of the bench. They'd also have Carlos Santana as the designated hitter.  That's a pretty impressive team, and it could have easily been a reality.

Somehow, the Phillies have come out of the rebuilding process with a team made up of mostly veterans, and a minor league system that is virtually empty after the promotion of Bohm, Howard and Moniak, and the disastrous trade of Connor Seabold for two of the worst relief pitchers the Phillies have had in recent memory.  If they're going to compete in the near future, they're going to have to spend a lot of money, and it's doubtful that they will with their history of being hell bent on staying under the luxury tax threshold.

It gives me no pleasure to say this, but the future I see for the Philadelphia Phillies is a team that plays slightly over .500 - just good enough to compete for a playoff spot, but not quite good enough to be a championship contender.  I also see Bryce Harper growing frustrated at his decision to sign with a team who hired a foolish general manager that squandered the Phillies rebuild, and an ownership group that's not willing to spend what it takes to contend.  I try to be an optimistic fan and to look for the positives, and there definitely are a few reasons to be encouraged, but the big picture isn't looking too good for the Fightin Phils.  I hope that I'm wrong.