It wasn't that long ago that the Phillies acquired J.T. Realmuto from the Miami Marlins.  It was February 7th, 2019.  Not long afterward, the Phillies signed Bryce Harper to an unprecedented 13 year contract, and with Realmuto locked up for the next two seasons, it looked as if the Phillies would bookend the decade as National League East Champions.
It didn't work out that way.  In fact, they weren't even close.
The Phillies finished the 2019 season with a .500 record, and they fared even worse in 2020 with a record of 28-32.  With injuries to the starting rotation and the second worst bullpen of the past hundred years, they would have likely finished in dead last if not for the fact that the season was shortened by the Covid-19 pandemic.
Now, J.T. Realmuto is a free agent, and it has been reported by Todd Zolecki that he's looking for a contract in the $200 million dollar range.  When you consider the fact that the Phillies will not spend above the Luxury Tax threshold, and when you consider the more pressing needs of the team if they hope to compete in the years ahead, this spells the end of Realmuto's time in Philadelphia.  With that being said, it's time to take off the rose colored glasses and examine the reality of the situation.

The Miami Marlins won the trade.
I was as happy as anyone in Philadelphia when it was announced that the Phillies made a trade to bring J.T. Realmuto to town.  This wasn't the first time the Phillies made a "win now" move by trading young pitching talent for an established star.  At the 2009 deadline, they sent Carlos Carrasco, Lou Marson and two prospects to Cleveland for Cliff Lee.  Later that winter, they traded a group that included Kyle Drabek, Travis d'Arnaud and one other prospect to Toronto for Roy Halladay.  At the 2010 deadline, they traded J.A. Happ, Anthony Gose and Jonathan Villar to the Astros for Roy Oswalt.  At the following year's deadline, they made another trade with the Astros, sending Jarred Cosart, Jonathan Singleton, Domingo Santana and one other prospect to Houston for Hunter Pence.
While some of these prospects didn't pan out (particularly Drabek and Singleton), the Phillies traded away valuable talent in each of these deals.  Carlos Carrasco and J.A. Happ were successful pitchers throughout the decade.  Travis d'Arnaud bounced around the league for a bit and has had an excellent 2020 as the starting catcher for the NL East Champion Atlanta Braves.  Guys like Anthony Gose, Jonathan Villar and Domingo Santana may not have become household names, but they've had respectable careers after being traded away by the Phillies.  The one thing that each of these trades had in common was that they brought established stars to a contending Phillies team, and they helped the Phillies win the NL East Championship in 2009, 2010 and 2011.
The same cannot be said for the J.T. Realmuto trade.  Not only did his acquisition not help the Phillies to win their division, but the men that they traded away helped a division rival to pass Philadelphia and secure a spot in the post-season.  There are two important differences between the 2009-2011 trades and the 2019 J.T. Realmuto trade.

Whether or not the Phillies re-sign their star catcher is irrelevant to the discussion of who won this trade.  Had they locked him up to an extension in February 2019, it could be argued that the exclusive negotiating rights, and therefore the extension, were part of the return that the Phillies received when they traded Sixto Sanchez and Jorge Alfaro to Miami.  However, that didn't happen.  If the Phillies do retain Realmuto's services, it will be a free agent signing on the open market like any other, and they will have to outbid the rest of the league to keep him.  If they were satisfied with that arrangement, they could have just kept Sixto Sanchez and Jorge Alfaro and waited for Realmuto to become a free agent after the 2020 season.
Even if this trade was 2 years of Sixto Sanchez for 2 years of J.T. Realmuto straight up, at even money salaries, I would still say that the Miami Marlins were the winners of this trade.  All of the hyperbole about "the best catcher in baseball" doesn't change the fact that Sixto led his team to the post-season while J.T. led his team to a .500 and sub-.500 season.  If the 2020 Phillies had Sixto Sanchez in the rotation instead of J.T. Realmuto behind the plate, it doesn't take a lot of imagination to believe that the Phillies would have been in the 2020 playoffs instead of the Marlins.
Now, consider that Sixto is under team control with the Marlins through the end of the 2025 season.  Regardless of where J.T. Realmuto plays in 2021, there is no valid argument to suggest that this was an "even" trade, or a trade the Phillies should have made in hindsight.  The Marlins did more than simply win this trade.  I believe when both of their careers have reached their conclusion, people won't look back on the 2019 swap as the Realmuto trade.  They will call it the Sixto Sanchez trade, and it will sit alongside the Ferguson Jenkins trade as one of the most lop-sided losses in the history of the Philadelphia Phillies. 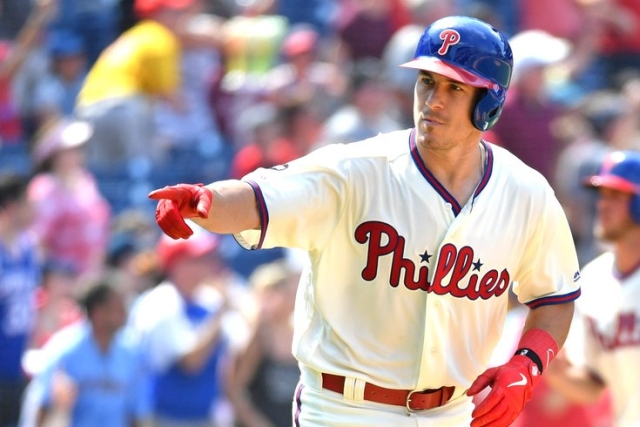 The Phillies should not re-sign J.T. Realmuto
If the situation were different, I would say that the Phillies should absolutely enter the winter of 2020 with the top priority of keeping their star catcher in Philadelphia.  That certainly is what many of the fans and podcasters have been saying.  It's the same song they always sing when this type of situation comes up: "billionaire owners are being cheap", and "if they cared about winning, they'd sign him", and "it's not my money, so pay him whatever he wants".  Of course, it's complete nonsense.  The Phillies had the 5th highest payroll in all of baseball, but the chronic complainers who have never run a business in their lives insist on spending their winters having a long, drawn out temper tantrum on par with an ill behaved child in the toy store whose mother refuses to buy a new bike for their precious little darling.
It's even more absurd when you see how these fans react to a team like the Tampa Bay Rays going to the World Series.  They had the fourth lowest payroll in all of baseball and defeated a New York Yankees team who had the highest payroll in baseball, approximately 200 percent higher than the Rays.  It's no fluke, by the way.  The Rays were a much better team during the regular season, finishing with the best record in the American League, and they sent the Yankees home in ALDS in convincing fashion.  These same fans argue that we shouldn't celebrate the fact that the Rays won with such a small payroll, and that we should instead admonish their front office for not spending more (and they'll no doubt lose their collective minds tonight if the Braves overcome the free spending Dodgers).  It's an foolish argument, and once again, it comes from men and women who have never run a business in their lives.  If they had, they would never take such an asinine position.  To the men and women who invest money in running a team, baseball isn't a hobby.  It's a business.  If a business owner finds a way to defeat their competition while spending less than half of the money they do, they are doing things right.  Fans can cry all they want about how the owners are "greedy billionaires", but it's not greed by any reasonable definition of the word.  It's smart business, and it's one of the reasons that the team owners became billionaires while the complaining fans have not.
You can try to talk sense to these people, just like the mother tries to talk sense to their whining child, but it falls on deaf ears as the child screams and cries in protest.  The child, like the fan, is unable or unwilling to see the big picture.  Their only concern is that their demands aren't being met.  They want their shiny new toy.  They feel entitled to it, and the temper tantrum will continue until they get what they want, or until they've tuckered themselves out and are left pouting in the corner.
For fans who can see the situation holistically, here are many reasons the Phillies should pass on Realmuto at his seven year, $200 million + asking price.

So, what is the answer then?  I don't know.  What I do know is that as good of a catcher as J.T. Realmuto has been in his career, the man can't pitch and he can't stop the team from blowing leads.  If your refrigerator is broken, you don't solve the problem by going out and getting the best microwave money can buy.  Andrew Knapp may not be as good as J.T. Realmuto.  He doesn't have to be if the team spreads the money that they would have spent on Realmuto around to address their needs in the bullpen and the back end of the rotation.  It won't solve all of the Phillies problems, but it would be a good start.