Candy Corn With All Of The Trimmings 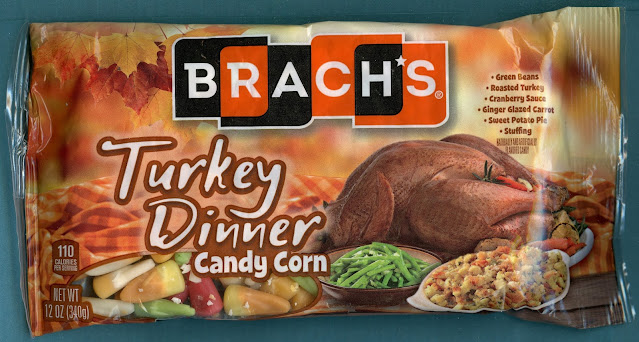 Turkey Dinner Candy Corn
Brach's (2020)
Just when you thought this year couldn't get any stranger, one of the oldest candy companies in the United States decides to tap into their inner Willy Wonka and release a bag of candy corn that's meant to taste like a full Thanksgiving dinner.
These are exclusive to Walgreens, which we don't have in my area, so I ordered two bags from eBay: one for myself and one for my dad.  Overall, they're actually pretty good.  It's not the kind of candy I could see myself buying on a regular basis, but as a seasonal novelty, they work pretty well.  Each flavor tastes like the food it's meant to be, and they're not bad at all.
Here are the flavors included in Brach's Turkey Dinner Candy Corn:

It's difficult to describe the experience of eating green bean flavored candy corn, but I'll do my best.  There is an unmistakable green vegetable flavor, that much is for sure, but it's mixed with a sweet candy flavor.  It's not a flavor combination I would choose, but it's better than you might expect.  It's not entirely accurate to say that it tastes like sweet butter on green beans, but that's as close of a description as I can get.  I suppose that calling it "shockingly not unpleasant" sounds as if I'm damning it with faint praise, but it's true.

This very much tastes like turkey gravy mixed with sugar.  I think this tastes more like turkey than the green bean flavor tasted like green beans, but the green bean one was a better tasting candy.  It's possible that a sweet flavor is slightly less jarring with vegetables than it is with meat.  I don't know.  Like the green bean ones, this isn't as bad as you're probably expecting it to be.

This was the first flavor in the bag that actually seemed like it should have been made into a piece of candy.  It was also in very short supply in my bag.  Out of a full 12 oz of candy, there were only three cranberry sauce flavored pieces of candy corn.  Out of all of them, it tastes the most like traditional candy, but it tasted the least like the thing it's meant to be.  I won't say that it didn't taste at all like cranberry sauce, but all of the other flavors were more realistic.

When I ate this, I was struck at first by a powerful ginger flavor, and then sort of a carrot aftertaste.  I would say that it had the strongest flavor out of the six.  It wasn't disgusting, but it was my least favorite compared to the rest.  I think if you're a fan of ginger candy, you might like this, but it's not my first choice.

Because pumpkin pie and sweet potato pie have such a similar flavor, I was expecting this to taste like pumpkin spice.  I was shocked to find that it's didn't taste a thing like pumpkin.  In fact, it;s an almost perfect candy representation of sweet potato pie.  This was my favorite flavor in the bag, and the only one that I think I would consider buying if they were going to offer it in a separate package.

You really get a strong flavor of stuffing spices with this one, like sage and pepper.  It doesn't blend especially well with the sweetness of candy corn, but it absolutely tastes like stuffing from a turkey on Thanksgiving.
So, that's it.  If you're interested in a bizarre experiment in seasonal confections, give these a try.