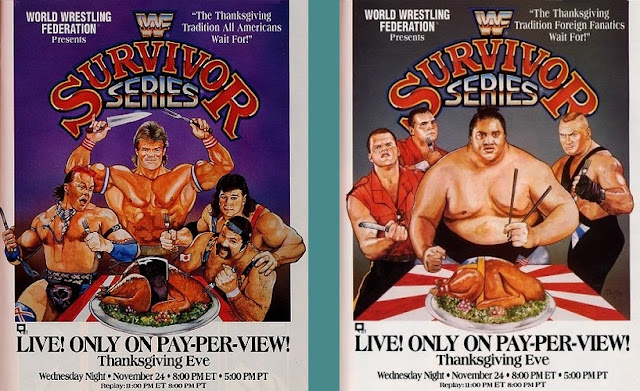 The 7th Annual Survivor Series
World Wrestling Federation (November 24, 1993)
This event was broadcast on pay-per-view 27 years ago today.  I was 13 years old at the time, which is probably why it's still one of my favorite Survivor Series events.  The matches don't hold up too well in retrospect (particularly the atrocious Four Doinks match), but the posters almost make up for it.  They feature the teams that were scheduled to face off in the main event of the night: The All-Americans (Lex Luger, Tatanka and The Steiner Bros) vs the Foreign Fanatics (Yokozuna, Ludvig Borga and The Quebecers).
The little details make these posters ridiculous enough to use as a Thanksgiving decoration.  Jacques Rougeau is brandishing a butter knife.  Tatanka, Scott Steiner, Ludvig Borga, and Pierre Ouellet (the man who would go on to become ROH World Champion PCO) are holding forks and staring menacingly.  Yokozuna is preparing to eat a roast turkey with chopsticks, while Lex Luger is holding a knife and carving fork above his head as he's about to dive in to a bird that has been dressed up in a black mawashi.
These posters must have been drawn early in the planning stages for the pay-per-view because the teams that wrestled in the main event would be mixed up a bit.  Quebecer Pierre and Tatanka were written out of the match and replaced by Crush and The Undertaker.