We Lost A True Champion 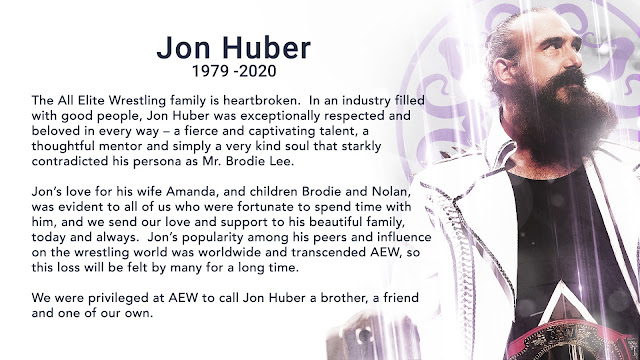 Jon Huber
1979 - 2020
A husband, a father of two, and a massively talented professional wrestler who has entertained millions of fans for over a decade is no longer with us.  Jon Huber, who wrestled for AEW and on the independent scene as Brodie Lee, and for WWE as Luke Harper, has passed away due to a non-Covid related lung condition.  He was only 41 years old.
I first has the pleasure of seeing Mr. Huber wrestle in March 2007 at a Chikara show in Hellertown, PA.  My first thought on seeing him was "Holy cow, this dude is huge" (he was 6'6" tall).  My second thought was "Oh, I get it.  He looks a bit like Jason Lee, who starred as Brodie in Mallrats" (only much taller).  My third thought as the match began was "Dude... this guy is incredible!" (and he most certainly was).  Since then, I've watched him grow into one of the most popular performers as a member of The Wyatt Family in WWE and reach new heights as the second AEW TNT Champion this summer.  He lost the title to Cody Rhodes on October 7th, and was mostly off of television after this point.  We all thought that he was sidelined by a minor ankle injury.  Sadly, it was much more serious than that.
From the massive outpouring of love on Twitter tonight, it is very clear that he was an absolutely incredible human being who loved his family and went above and beyond to help his colleagues grow as performers.  My heart goes out to his family, his friends, and everyone who was entertained and/or inspired by this truly gifted performer.  Thank you, Mr. Huber.