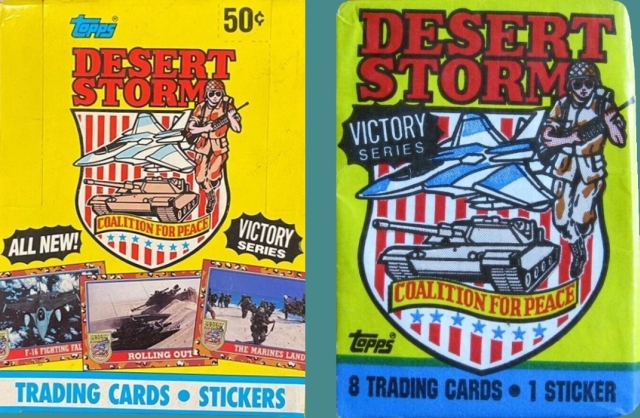 Operation Desert Storm cards
Topps (1991)
The Gen-X kids like myself who were born in the late 70's and early 80's grew up in a really strange and transitional time.  For the first ten years of my life, we were still in the Cold War with the Soviet Union.  You know those old Duck and Cover educational videos from the 50's and 60's we all laugh about on YouTube?  They were still teaching that in school when I was a kid.  My first grade class did a duck and cover drill where we all practiced getting under our desk.  However, the Cold War wasn't my strangest experience with war when I was a kid.  That honor goes to Topps Trading Cards.
Thirty years ago today, Operation Desert Storm began in Iraq.  I was in fifth grade at Heights Terrace Elementary School at the time, and I remember that they brought televisions on wheel carts into our classrooms where we watched the live news footage as it happened.  Our teachers discussed it with us in class, but the information we were given was pretty vague.  It pretty much boiled down to two things: Saddam Hussein invaded Kuwait, and the American military was headed to the Middle East to liberate them.  Come to think of it, that's pretty much my extent of knowledge about the war today.
In the months that followed, we were saturated with information about the Gulf War.  I heard about it from teachers, from other kids, from my grandparents at home (I was living with my mom's parents at the time), and from television and radio.  It was literally everywhere - even at the baseball card shops.  Topps released not one, not two, but three different series of trading cards for the war.  If you went through my baseball cards back then, you would have found cards of General Norman Schwarzkopf and the Patriot Missile right between the Cal Ripken and Mike Schmidt cards.  If the idea of Topps trading cards for a war isn't weird enough, they weren't the only ones making them.  Football card manufacturer Pro Set came out with their own series to compete with Topps, and the Pacific Trading Card Company beat them both to the punch with their own Operation Desert Shield card series, before the conflict escalated to a full scale war.  I remember some of the adults in my life buying them and putting them away with the expectation that they'd be worth money someday.  In reality, they're barely worth the cardboard they're printed on.  You can still find hundreds of packs in unopened boxes for sale on eBay.  The asking price seems to be around $5 for a box of 36 packs - a fraction of the 50 cents per pack that they sold for in every gas station and grocery store in the country back in 1991.
When I started Kindergarten, we were still doing Duck and Cover drills.  By the time I graduated high school, we had 28.8k dial up internet, and in the years between, we had trading cards for a war halfway across the world.  What can I say; it was a weird time to grow up.