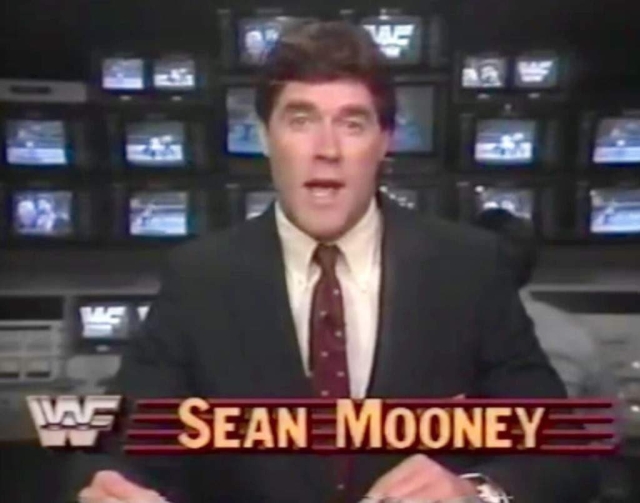 WWE Network
2014 - 2021
When I was a kid, the WWF television shows used to have a segment with Sean Mooney speaking to the fans from the Event Center.  It was presented sort of like a news broadcast, where Mooney would briefly discuss one of the feuds that was going on, then cut to a prerecorded interview, then back to Mooney to set up another feud, then cut to another interview, and so on until the segment was over.  Usually it concluded with a plug for whatever big show was coming up in which these feuds would be settled in the ring.
The interviews were typical 80's and early 90's WWF material: funny, over-the-top rants from dudes in strange costumes talking about god only knows what.  Seriously, go back and watch some of the Ultimate Warrior interviews from these shows and you'll think that you're having a fever dream.  However, for as entertaining as the interviews were, the part that fascinated me the most was that wall of television monitors that Sean Mooney was sitting in front of.  I used to think of how awesome it would be to spend a day in the Event Center with the ability to watch any match from the WWF archives on these screens. 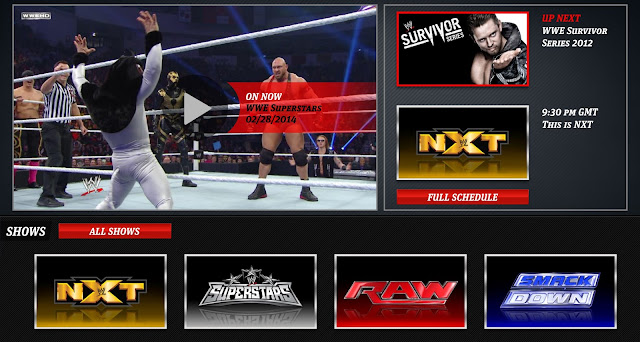 Fast forward to February 24th, 2014 and the wish I had as an 8 year old kid was granted to a 33 year old man in the form of the WWE Network.  Thousands of hours of archived WWF and WWE matches, and current events that once cost up to $50 each on pay-per-view were made instantly available for $9.99 per month.  It was a deal that almost seemed too good to be true for a fan of professional wrestling.
I subscribed to this service for a number of years, and I enjoyed it quite a bit.  I especially enjoyed the old WWF Saturday Night's Main Event shows, the Coliseum Home Video archive, the weekly WWF shows from the late 70's through the early 90's, and the years of ECW, WCW Nitro and Thunder episodes (although with a lot of the music edited out).  I had lost interest in keeping up with the weekly WWE Raw and Smackdown programs years ago.  They're horribly long and dull, and the writing is so poor that it's become embarrassing to sit through.  However, for a few years, I watched their weekly NXT show and the monthly pay per view events.  Unfortunately, the product devolved into such a ridiculous mess that I've given up on those too, and I ended up cancelling the service about a year ago, but I can't deny that for a few years in the mid 2010's, the WWE Network was a childhood dream that had come true.
Now after seven years, the WWE Network is coming to an end.  On Monday, it was announced that NBC Universal has acquired the rights to the entire catalog of WWE content, and that its streaming network would be absorbed into their new Peacock service.  They have a free tier, but to have access to the WWE content, subscribers will need to pay $4.99 a month for Peacock Premium (with limited commercials) or $9.99 for Peacock Premium Plus (with no commercials).  They're still pretty new, so they have a modest amount of content.  Right now, they seem to be pretty heavily focused on The Office, Law & Order and Two & A Half Men, which I couldn't possibly care less about.  Frankly, I wouldn't agree to watch any of those three programs if they paid me $4.99 a month; however, if they bring Seinfeld on board someday, I might have to give Peacock a try.