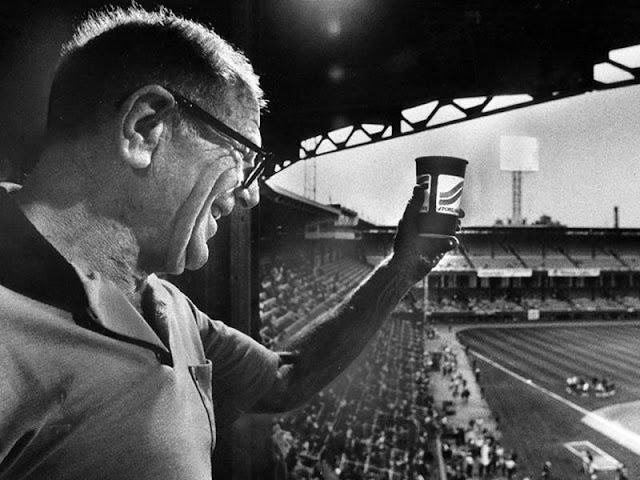 Bill Veeck
1914 - 1986
The most awesome human being to ever own a MLB team was elected to the Baseball Hall Of Fame by the Veterans Committee 30 years ago today.  He has a legacy that is unmatched by any owner or executive in the history of the sport.
The thing that I've always admired the most about Mr. Veeck is his attempts to desegregate the sport.  After the 1942 season, he attempted to purchase the Philadelphia Phillies with the intention of breaking the color barrier by signing several of the star players of the Negro Leagues to play for the Phillies in 1943.  Unfortunately, baseball's commissioner at the time was a notorious racist who blocked Veeck's purchase of the team to prevent his plan from going forward.  The commissioner died in 1944, after which the game could begin to take its first steps to move beyond the bigotry and ignorance that he fought to maintain.
Mr. Veeck went on to purchase the Cleveland Indians in 1946, and soon thereafter, he signed Larry Dolby - the first player to break the color barrier in the American League, and the first player to go from the Negro Leagues directly to the Major Leagues without spending time in the minors.